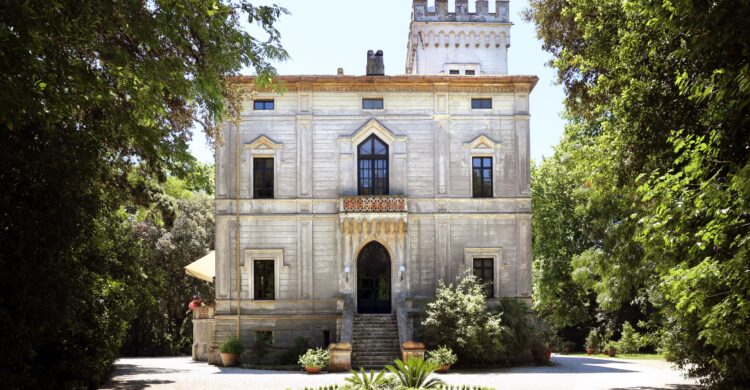 Villa Orlando is located in Torre del Lago Puccini (Viareggio), overlooking Lake Massaciuccoli and not far from the villa that once belonged to Giacomo Puccini. The towers of Villa Orlando are today the only ones in the “Torre” area, but they are not the ones who gave it its name, on the contrary they are a tribute to the ancient tower that once guarded the lake, lost many years earlier.

History
It was the Livornese merchant of Alsatian origin Piero Kotziana who commissioned a leisure hunting lodge on the lake from the Florentine architect Patchò, who built it in neo-Gothic style in 1869.
In 1896 it was bought by Salvatore Orlando, whose heirs still own it today.

From 8 September 1943, for exactly one year, the villa was requisitioned by the Germans, who lodged there a command responsible for the Massaciuccoli seaplane base. Also damaged by bombing, the villa and its park were restored after the war.

Description
The villa has an almost cubic shape, enlivened on the outside by the staircase to the raised noble floor, by a terrace facing the lake, and by a slender panoramic turret. Perhaps in honor of the client’s Ligurian origins, the roof was covered in slate slabs, rather than with the typical Tuscan terracotta tiles.

Inside, the rooms are divided according to the ratios of 3 and 4, with a neo-Renaissance dining room frescoed by Gugliemo Micheli with grotesques and reproductions of ships produced in Livorno on behalf of Orlando. The library also contains the historical archive of the Orlando family.

The large park that surrounds it, which is part of the naturalistic oasis of the Migliarino, San Rossore, Massaciuccoli Natural Park, reaches as far as the road and continues along the lake well beyond the municipal border of Viareggio, in the administrative territory of Vecchiano, for a total of about four hectares of extension. Organized on three main avenues, it contains plane trees, palms, cypresses and rose gardens as dominant essences.

At the lake there is a small dock for covered mooring of boats, also embellished by a turret.

At the entrance on Viale Puccini there was an articulated neo-Gothic gatehouse, enriched by a round arch, a turret and a crenellated wall enclosed between two lateral turrets. This complex was mined in 1944 by the retreating Germans, where they had installed an anti-aircraft gun.