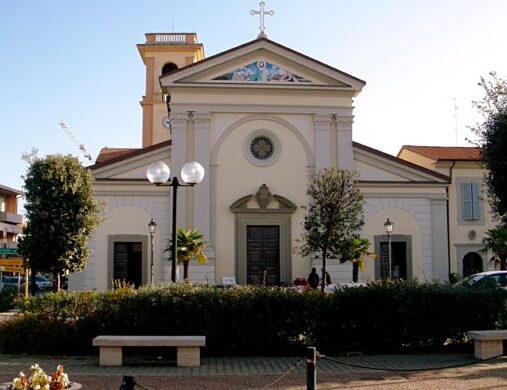 The church of San Giuseppe is the parish church of Torre del Lago Puccini, a hamlet of Viareggio in the province of Lucca. It is located on the corner of Viale Puccini and Via Aurelia 165. It is undoubtedly one of the most beautiful and ancient in the area, frescoed both on the façade and inside by the Torrelaghese painter Ferruccio Orlandi (1897-1975).
Description
The church, dating back to the end of the eighteenth century, is characterized by a salient façade in the neo-Renaissance style, the classic shape of a Latin cross, with three naves and a transept.

The central part ends with a triangular frescoed pediment, supported by paired pilasters, and in the center is the main entrance door. On the sides are the secondary entrances. Another entrance opens onto the left transept, which opens onto Viale Giacomo Puccini.

The interior of the building consists of three naves with five bays, the transept is a chevet made up of a rectangular nave and an apse. The central nave is covered by a barrel vault, the side ones by cross vaults.

Above the transept rises a dome, painted internally. Tall windows with stained glass let in the light. The naves, the transept and the upper part of the altar are decorated with large and bright frescoes by Ferruccio Orlandi.

History
In this area, once part of the parish of Quiesa, there was only one oratory of San Giuseppe, near the lake. The population grew very rapidly and consequently the number of births and deaths increased, who, having to receive the sacraments of the Catholic religion, were transported either to the church of Viareggio, or to that of Quiesa, on the other side of the lake. It was therefore necessary to build a new church in that area: the site chosen was at the crossroads between the Via Regia which led from Viareggio to Pisa and between the road which led from the lake to the sea.

On July 4, 1774, after delimiting the territories for the cemetery and rectory, construction work began. In 1776, at the expense of the Carthusian fathers of Farneta, the new church was built, which belonged to the diocese of Pisa until 1789. It was very small, with a single nave and the cemetery in the land behind it.

Due to the cholera epidemic in 1854 and the huge number of victims, a new cemetery was built far from the town center, where it is still today.

In 1878 it was enlarged with two small aisles, an event witnessed and remembered by a plaque placed in the right wing of the transept. This is due to the constant growth of the population and the development of the small town. At the time it was located on the corner of Via per Pisa (today the Aurelia state road) and Via Dinelli (today Viale Giacomo Puccini and Viale Garibaldi).

During the years of the Second World War, the town witnessed destruction and abandonment, in particular from the heavy bombings that hit the nearby city of Viareggio and the railway junction. The evacuation of the town was almost total, and in September 1944 the German troops invaded the territory: in retreat they undermined and brought down the bell tower, destroying the rear part of the church and the altar (8 September 1944).

In 1951 the reconstruction of the destroyed parts and the new bell tower was completed, which in 1955 was enriched with a clock donated by the Municipality of Viareggio.

On 10 February 1963 it was decided to build new parish premises. After about two years, the elegant construction was completed, and still today it stands next to the church.

In 1966 a statue of St. Joseph was purchased, while in December 1972 the new altar was inaugurated, equipped with an ambo and baptismal font.

New renovation of the bell tower facades in 2020.

On November 29, 1926, the funeral of Giacomo Puccini was held in the church of Torre del Lago. Two years had passed since his death in 1924. The funeral procession passed through the avenue that led to his villa and he was buried there.

The bell tower
On May 23, 1909, the first bell tower was completed, brick-red in color resting on a high stone base, with a terrace above it equipped with a lightning rod.

During the Fascist era, a siren was added to the two bells, which sounded over the town whenever a meeting or public assembly was organised. With the Nazi occupation, during the Second World War it was used as an observation tower by German soldiers for those areas south of Viareggio.

Unfortunately, it was brought down by retreating German soldiers together with part of the church, in September 1944, after roundups and bombings. For a long time the church was equipped with a temporary wooden bell tower, near the current parish halls.

The repair of the very serious damages was concluded in 1951, when the church was reconsecrated (September 8). The new bell tower was rebuilt in a few months, from the top of which five bells can be heard today: three large and two small, cast by the Magni di Lucca foundry after the war.

In 2020 a renovation of the bell tower facades was carried out with the addition of the lighting system.

Works
On the left side, which overlooks Viale Giacomo Puccini, there is a large bas-relief (Bassorilievo per la Liberazione) also dedicated to Venio Bini and Lelio Gori, by Serafino Beconi, testifying to the cruelty and atrocities suffered by the Torrelaghese population during the second world war.

On the facade, above the altar, and inside the dome there are numerous frescoes and paintings by Ferruccio Orlandi in the mid-fifties, restored by his son Lanfranco in the nineties.

Above the central door, there is a painting depicting the last supper, also by Lanfranco Orlandi donated to the parish church.

The organ was donated by Antonio Puccini in 1929, unfortunately damaged during the collapse of the bell tower but rearranged and still in function today.

Other churches in the village of Torre del Lago are: Church of San Marco al Lago (on the Puccini viewpoint), Church of San Pietro (1962), Summer chapel in the Lagomare district.