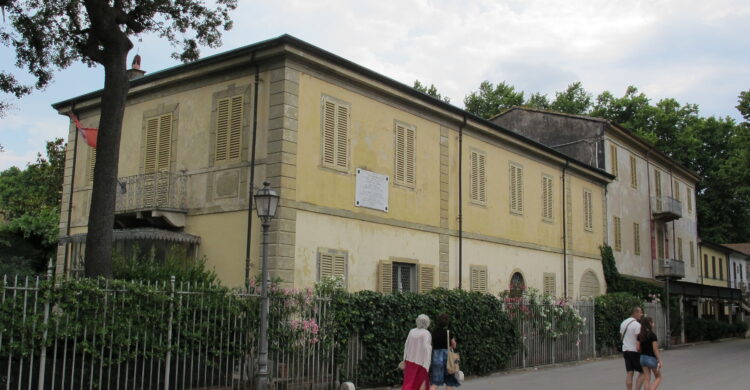 Villa Puccini, which belonged to the famous opera composer Giacomo Puccini, is an Italian national monument located in Torre del Lago Puccini, a fraction of Viareggio in the province of Lucca, on the shores of Lake Massaciuccoli. The villa is now home to the Villa Puccini Museum, which was managed by Simonetta Puccini, Giacomo’s niece, until his death.

The purchase by the composer dates back to 1898, enchanted by the tranquility of the lake shore, after having stayed there since 1891 as a tenant of the owners, the Dukes of Austria. The building was completely destroyed and rebuilt, according to a project resulting from the collaboration between Puccini, De Servi, Nomellini, Galileo Chini and the architect Vincenzo Pilotti.

The simplicity of the exterior of the building, with a rectangular plan on two floors, contrasts with the rich eclectic decorations of the interiors which characterize each room according to its function: the piano or writing room, the sitting room, the living room (with a ceramic panel by Chini on the fireplace) and the chapel, decorated by Adolfo De Carolis, where the composer is buried together with his wife, son, daughter-in-law and granddaughter.

The small garden, which was originally bordered by the lake, is inspired by the size and flower beds decorated with stones, by the Japanese garden. The connection between the building and the garden is via an iron and glass bay window. A bronze monument representing the Master has been placed near the shore.