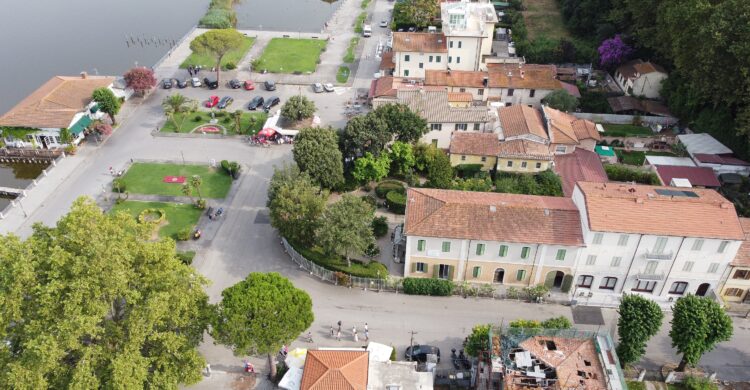 Torre del Lago Puccini, also known simply as Torre del Lago, is the only fraction of Viareggio, in the province of Lucca. Its territory is an active industrial and cultural centre, populated by about 12,000 inhabitants; known for hosting the house of the composer Giacomo Puccini, the Puccini Festival, floriculture, and when the municipality of Viareggio was divided into decentralization districts, it corresponded to that of District 1. It is part of the Piana di Lucca territory together with Viareggio.

Its name originates from the presence of a tower which in the 15th-16th century stood on the nearby lake of Massaciuccoli (first called Torre Guinigi and then Torre del Turco).

To the original name of Torre del Lago was added, on 21 December 1938, that of Puccini, to honor the composer who lived here and composed many of his famous operas. His residence, Villa Puccini, stands on the belvedere of Lake Massaciuccoli and houses the composer’s tomb. The villa can be visited and is a destination for tourists and opera lovers from all over the world. A short distance from the composer’s villa is the Gran Teatro, where his works and other concerts are performed.

Climate
The climate of Torre del Lago is Mediterranean, although it has a rather high level of humidity (between 60 and 90% relative humidity in the summer months) with hot and muggy summers and very frequent mists and mists in the winter months. Often the heat island above the built-up area makes temperatures higher than in the surrounding areas (eg lake, pine forests), especially in winter. Also in winter, there may be an absence of sun for several consecutive days.

A rainfall of 900-1000 mm per year, caused by the proximity of the Apuan Alps to the coast. On the basis of the reference thirty-year average (1961-1990), the average temperature of the coldest month, January, is 4 °C; that of the hottest month, July, stands at +28.9 °C.
Snowfalls occur mainly without accumulation, the last big snowfall that whitewashed the city occurred between February 27 and March 1, 2018.

Monuments and places of interest
In the historic center of Torre del Lago we can find many houses in Art Nouveau architecture, but more majestic buildings are found in the center of Viareggio.

Churches
• Church of San Giuseppe
• Church of San Pietro, viale Venezia, built in 1962
•Church of San Marco al Lago, also frescoed above the altar by Lanfranco Orlandi.
•Summer chapel at the Lagomare
• Church of Padre Pio (inside the pine forest, however belonging to the diocese of Pisa)

The lake of Massaciuccoli was one of the subjects most often portrayed by some exponents of Macchiaioli and post-Macchiaioli painting, such as Cabianca, Pagni, and above all the Tommasi brothers. Despite these cultural aspects, the area has been affected by heavy environmental tampering due to improper forms of exploitation.

The Gazebo, originally a wooden structure resting on stilts and covered with sedge, was built, as we see it with its oriental echoes, by cav. Paolo Triscornia between 1922 and 1924. Used as a cultural lounge for a circle of friends and artists, including Lorenzo Viani, Plinio Nomellini, Moses Levy, Arturo Dazzi and Carlo Carrà, it was then connected to the villa by a wooden pier.

In the pioneering years of aviation, the lake was used as a base for military seaplanes and in 1931 it hosted a national meeting of almost all the squadrons then existing. In the years from 1932 to 1935 the lake was home to the two giants of the Regia Aeronautica, the Dornier Do X. During the Second World War, some departments with maritime reconnaissance and air rescue tasks were based in the lake, until the day of the armistice, when the base was dismantled.

The pine forest of Torre del Lago
Torre del Lago is between the lake and the sea. The lake is very well known, but the marina is also well known thanks to its restaurants, pizzerias, discos and bathing establishments, the oldest dating back to 1900. Going towards Viareggio you come across the free beaches, the most famous of which is that of Lecciona .

The eastern pine forest
Vast green area that goes from the Darsena district of Viareggio to Torre del Lago Puccini. It is part of the Migliarino, San Rossore, Massaciuccoli Natural Park. Anthropization is less than in the Pineta di Ponente due to the naturalistic constraints that protect it. In this pine forest is the Villa Borbone.

Culture
Every year, in the summer period, an opera festival is held in honor of Puccini, the Festival Puccini, in which some works by the composer who has long been permanently present in the opera repertoire.

Torre del Lago is also famous for its marina, very busy especially in the summer, for the presence of restaurants and discos, and for the Lecciona beach. Torre del Lago is the fulcrum of the Friendly Versilia project, the main and best-known Italian experience of gay tourism. In fact, among the many discotheques, Mamamia stands out, a famous gay disco which had its peak of success in the years 2003 – 2004, but which still today attracts young people and people of all ages from all over Italy.

Kitchen
The typical Torrelaghese dishes are rare to find today, but marsh game has been the protagonist of the local gastronomy for a long time: mallards, teals and roast garganeys, snipes, penne with coot, were the most famous. The marsh birds overlooked those of the maquis, such as wood pigeons, woodcocks, pheasants and other small migratory birds which together with wild boars, fallow deer and hares constituted a faunal heritage of great importance, which in the kitchen represented the pride of local catering.

Typical sweets that have accompanied the feast of St. Joseph in Torre del Lago for over a century are the cakes with bischeri (or St. Joseph’s cakes, or more simply rice and chocolate cakes): shortcrust pastry cakes with rice dough, raisins , pine nuts, chocolate and liqueur. Other typical dishes of the local cuisine are tordelli with meat sauce, polenta with wild boar.