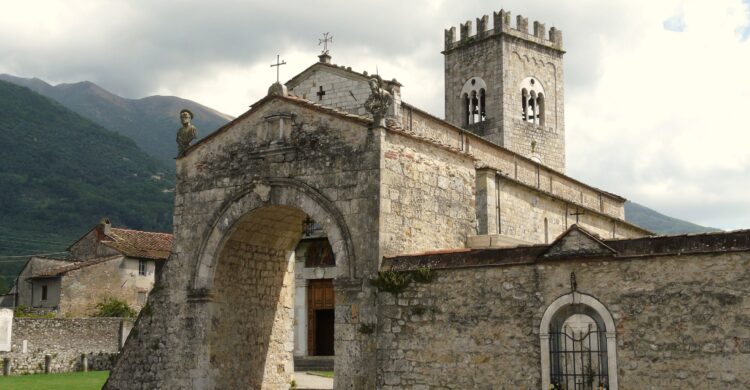 The abbey of San Pietro is a Catholic abbey dating back to the seventh century, in the municipality of Camaiore, in the province of Lucca, within the territory of the parish of Santa Maria Assunta, belonging to the archdiocese of Lucca.

History
The first two documents that mention it date back to the year 761, during the Lombard domination when the Duchy of Lucca was the capital of Tuscany.

In the following centuries, the abbey became an important complex consisting of the church, the bell tower, the arch, the cemetery and a monastery surrounded by crenelated walls.

At the beginning of the 12th century it reached its maximum splendour. The abbot had the function of episcopal and civil manager under the protection of the Holy See. Both for the donation of the Countess Matilde di Canossa, and for the initiatives of the monks themselves, the primitive church, which was built with a single nave with a single-storey floor and a stone altar, underwent a profound transformation in the XII century assuming the definitive architectural aspect. The two side aisles, the pediment, the apse and the trestle truss of the roof were added.

In the first half of the 13th century, the monastic complex was granted to the monks of the Florentine order founded by Gioacchino da Fiore.

The abbey was sacked and set on fire, together with the town of Camaiore, twice: the first, in 1315 by Castruccio Antelminelli and the second in 1329 by Marco Visconti.

Description
External
The entrance arch leads onto the square in front of the church, today a grassy lawn (Benedictine cemetery suppressed for several centuries) and is the only remnant of the 13th century crenellated walls. In the past it was the main access to the Abbey. Entirely built in stone, it has been recently restored preserving its spontaneous simplicity.

The Romanesque church is characterized by a masonry entirely in squared stones. The facade is salient, according to the heights of the three internal naves. In the lower centre, there is the only portal surmounted by a marble coat of arms and a lunette sheltered by a sloping roof. Inside the round arch there is a polychrome fresco depicting the Madonna and Child enthroned between two saints. Above the portal, there is a mullioned window supported by a marble column with a carved capital.

Along the left side of the church there is, near the apse, the bell tower. With a square plan, it is crowned with Ghibelline merlons. On each of the four sides there are three orders of windows, single, double and triple lancet windows from below.

Interior
The church has a basilica plan inside, with three naves covered with wooden trusses and divided by two rows of round arches resting on quadrangular pillars. Along the walls, there are various single lancet windows which ensure the natural lighting of the church.

The central nave ends with a semicircular apse of slightly smaller section and height. The presbytery area is raised by a few steps compared to the rest of the church and was completely rebuilt after the Second Vatican Council. In an advanced position, on the left, there is the carved wooden ambo, while in the center is the modern high altar, with the presidential seat behind it, made up of wooden benches decorated with motifs with small arches. Above the altar, a painted Crucifix hangs from the ceiling.

Among the works kept inside the church, there is a copy of a polyptych by Francesco Anguilla, now in the Museum of Sacred Art of Camaiore, depicting the Madonna and Child Enthroned with Saints (15th century). The fresco with Santa Maria Egiziaca, on the first pillar on the left, and the Madonna della Pietà, on the second pillar on the left, inserted inside a rich Baroque marble altar, date back to the 14th century.

Pipe organ
At the end of the right aisle, leaning against the wall, is the Mascioni opus 1130 pipe organ, built in 1995.

The instrument has an entirely mechanical transmission. Its console has a window and is located in the center of the elevation. It has three keyboards of 54 notes each and straight pedal of 30 notes. The registers are operated by pull knobs placed in two groups of two rows each on the sides of the keyboards.

The organ is enclosed within a wooden case having the shape of a parallelepiped. The facade is characterized by the exhibition, made up of main flues with miter spouts; these are arranged in a cusp with lateral wings in several fields, on the sides and above the console.