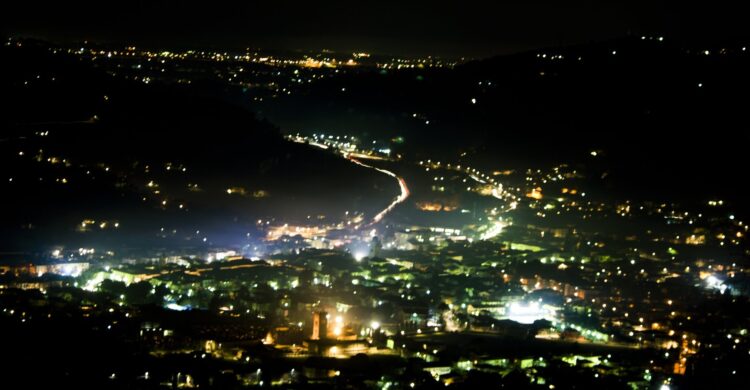 In its territory there are many characteristic environments. In fact, it goes from the beach of Lido di Camaiore to the peaks of the Apuan Alps such as Mount Prana, Mount Matanna, Mount Gabberi, passing through more or less high hills. The Capezzanese plain is also important, known for the cultivation of flowers or nurseries in general, in addition to the seafront of Lido and the hilly hamlets with small cultivations of vines and olive trees. From a hydrographic point of view, Camaiore is very rich in water present above all in large underground aquifers from which it is continuously extracted both for private use, for horticulture and by some contiguous municipalities for the supply of local aqueducts.

Modest streams of water run along the whole territory, fed by the drainage of mountain waters; among the largest is the Lombricese river which runs at the foot of Monte Gabberi, touches the nearby town of Lombrici and joins another course, the Lucese, which descends instead from the homonymous pass and reaches the valley crossing Nocchi, Marignana and the lower part of Pieve di Camaiore up to Camaiore. From here on it will join with the Lombricese to form the Camaiore river which at its mouth is also called Fosso dell’Abate.

Along the whole territory there are also small basins or lakes of modest size fed by the various springs. The entire coast of Lido di Camaiore is washed by the Ligurian Sea, which extends from the Ligurian coast to the promontory of Piombino, and not by the Tyrrhenian Sea as erroneously believed, whose denomination has replaced the historical one of Mare Toscano in the common language.

Monuments and places of interest

Religious architecture
•Badia di Camaiore: the first two documents mentioning the abbey of Camaiore date back to the time of Lombard domination. At the beginning of the 12th century the abbey reached its maximum splendour. The abbot had the function of episcopal and civil manager under the protection of the Holy See. Both for the donation of the Countess Matilde di Canossa, and for the initiatives of the monks themselves, the primitive church, which was built with a single nave with a single-storey floor and a stone altar, underwent a profound transformation in the XII century assuming the current architectural appearance. The two side aisles, the pediment, the apse and the trestle truss of the roof were added.
•Pieve di Santo Stefano: the parish church is documented from the 9th century and stands in a hilly area under Mount Prana along the Via Francigena. Its architecture is defined Romanesque-Lucca and its jurisdiction included the valley of Camaiore up to the borders of Pieve a Elici and Valdicastello. The facade, restored in the seventeenth century, has a great perspective effect with a staircase set in the square. Inside we find a marble sarcophagus of Roman origin (II century), tomb of Lucio Imbricio, a Roman citizen, coming from the town of Lombrici.
• Collegiate Church of Santa Maria Assunta
•Church of the Immaculate Conception and of San Lazzaro
•Church of San Michele

Civil architectures
• Teatro dell’Olivo
• Villa Borbone delle Pianore
•Marginette di Camaiore: in the territory of Camaiore there are several sacred images popularly called “Marginette” (small structures with a gabled roof or in the shape of an aedicule). They are scattered along the paths in the towns, villages and in the historic center of the capital.
•Monuments to the fallen. In front of the Badia di San Pietro there is a plaque commemorating the fallen of the great war (1915-1918). The plaque shows the photographs of the fallen and the following inscription “Pax viva eterna in the shadow of his sanctuary the memory of the confreres of the SS. Pietà who died bravely in the great war Cap. Lari Pietro, Sol. Altamura Bernardo, Antonelli Angelo, Angeli Eugenio, Dalle Luche Adolfo, Dalle Luche Angelo, Fibbiani Vincenzo, Romboni Diomede, Dalle Luche Vincenzo, Moriconi Alfredo, Salvietti Ferdinando”. Another plaque placed by the Municipality of Camaiore commemorates another thirty fallen and bears the following inscription “In the dark days of violence, innocent victims of the blindness of reprisal and war fell, the citizens wanted this memorial stone to be placed in memory so that those who will come will remember. ”

Kitchen
•Scarpaccia: it is a savory pie traditionally prepared with courgettes, flour, salt, pepper and onion. It is served hot or cold as an appetizer or snack dish. It is a typical summer dish. In the Capezzano Pianore area it is customary to add grated Parmesan, extra virgin olive oil and eggs. The Camaiore Scarpaccia is different from the Viareggio one which is instead sweet.
•Torta di Pepe or “Co’pizzi”: it is a savory pie made with rice, chard, homemade bread,eggs, pepper, parsley and pecorino cheese. Once the dough is cooked, it is spread on a sheet made with flour, water, salt, oil and butter.
• Tordellata pasta: it is a savory dish made with a meat sauce, to which boiled chard and sausage (raw) are added. It mixes well with ricotta, parmesan and pecorino. Once the hand-rolled pasta (macaroni) is cooked, it is seasoned in layers with the previously made sauce.
•Tordelli: it is a savory dish with pasta (similar to ravioli) filled with minced beef and pork, boiled chard, Parmesan cheese, eggs and breadcrumbs.
•Pasimata: it is a “special” bread with the addition of anise seeds which is prepared during Holy Week. It has a squat shape with deep incisions, so that it can be broken into equal parts with the hands, thus recalling the rite of the last supper. On Easter morning it is eaten as breakfast with boiled eggs blessed.
•Chocolate cake: after having cooked the rice in well-sweetened milk, dark chocolate, eggs and butter are poured into it. Mixed everything is spread on a sheet. Strips of pastry are cut and placed crosswise on the cake to form a lattice.
• Befanini: Befanini are biscuits that are packaged a few days before the Epiphany feast. The biscuit dough is cut into the shape of stars, birds, fish, witches. These figures are obtained with tin moulds.
•Necci: chestnut flour waffles (sweet) cooked on testi (round iron plates, or waffle irons).
•Pork mortadella: also called “sbriciolona”, it is a typical salami from the Camaiore area. The careful processing of the meat has made it well known and appreciated not only locally. With a sweet and delicate taste and a fragrant aroma, it has the typical shape of salami, dark color and soft consistency. Selected pork loin, pork neck and bacon are used, to which are added aromas and spices, salt, pepper, fennel seeds, cinnamon and cloves. The meat is minced together with pieces of hard fat, kneaded by hand and stuffed into natural casings with a tight binding. The product is left to mature for about a week in an airy environment and then left to mature in a suitable place for a period that varies according to the weight of the mortadella. The current production is intended for local and regional consumption. It is produced in some salami factories in Camaiore and Massarosa.
•Biroldo: is a pork sausage made with the parts considered less noble: head, lungs, heart, tongue and sometimes offal, all mixed with pig’s blood

Events
• Follie di Ferragosto: party that enlivens the city center in the heart of summer. During mid-August at the central café on the marble tables people could savor the famous “hard piece”, a Sicilian cassata. The antiques market takes place in the streets of the centre, which lasts for a week until August 15th. On the night of the eve of the Assumption, the streets of the center come alive. On Santa Maria day, people gather in the square to take part in the famous bingo. The first historical news of this tombola dates back to 1857 when the proceeds of the event were donated to the Stigmatine nuns. The tombola stage stands in front of the building which is located next to the town hall.

• Epiphany of Capezzano Pianore: every year, on 5 January from 3 pm until late at night, in the hamlet of Capezzano Pianore, numerous groups of singers and musicians, accompanied by the Befana and the Befano, parade through the streets of the center of the hamlet and in houses of the Municipality, bringing laughter, celebration and dancing throughout the territory. There are numerous folk groups (which also come from outside the Municipality of Camaiore) who are the true proponents of this tradition. The party begins at 15:00 in Piazza degli Alpini in Capezzano Pianore with the “Rassegna delle Befane” (which reached its 28th edition in 2010), organized by the Mercy of Capezzano. Here all the groups parade, with music and entertainment, on the stage set up for the occasion. The party continues from 20:00 to 24:00 in via Italica, still in Capezzano, with “Waiting for the Befana”, an event organized since 2001 by local merchants. In this event the traders offer typical products, fried panzerotti, pizza, wine, tea, hot chocolate, etc., waiting for the groups of witches to come and perform as per tradition. During the evening, waiting for the Epiphany, there is music with DJs, bands and entertainment for adults and children.

Sports
Camaiore is an important center for sport climbing and in its surroundings there are numerous climbing sectors with more than 800 itineraries featuring various climbing styles. Thanks to its climate and the various exposures of its walls it is possible to climb in Camaiore throughout the year.

The Lido di Camaiore hamlet, a well-known tourist destination, has been the finish line of the Giro d’Italia several times:

Volleyball Camaiore (men’s volleyball) plays in the Serie B2 national championship. Another sport practiced by the population of Camaiore is the “tug of war”, a traditional type game recognized by the FIGeST complete with an Italian championship, where the city of Camaiore sees the primacy in the female category, first won in 2018 by the “cerberi” association and subsequently won by the holders of the “Black bull girls” scudetto.