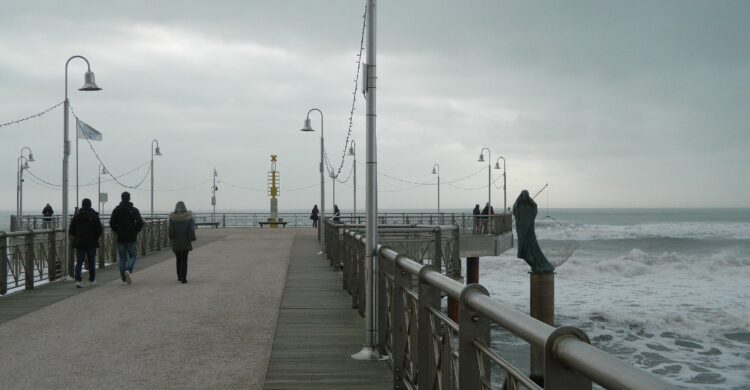 Tonfano, originally “Tonfalo”, is one of the four localities into which the fraction of Marina di Pietrasanta is divided, together with Fiumetto, Le Focette and Motrone. The name comes from the river that flowed in the area and was later filled up. Tonfano borders Fiumetto to the north and Motrone to the south.

History
Tonfano was, in the 19th century, the first settlement destination among the four towns of Marina di Pietrasanta. The first inhabitants were fishermen, who settled near the mouth of the river. Subsequently, even those who had already owned land in the area since the eighteenth century built villas and holiday homes where they went in the summer months to enjoy the cures of sea bathing, a fashion of the time. After the First World War, Tonfano became a tourist resort with a seaside character.
During the Second World War, American soldiers settled in Villa Rebua and Villa Battelli, where they were able to monitor the landings of the small planes that served as reconnaissance aircraft on the Gothic Line.
This airstrip was created by silting up the stretch of the Tonfano river that passed through that area. Once the river disappeared, the bridge that connected viale Carducci to via Versilia and over which the tram line passed was also destroyed.

Territory and reclamation
The territory of Tonfano, like that of the surrounding areas, was originally a swamp. The first reclamation works took place in the sixteenth century by Cosimo I, but the territory remained largely marshy at least until the nineteenth century.
The Tonfano river was fed by the resurgences of the locality of Vaiana, the so-called “polle di Vaiana”. The stretch of the river passed almost parallel to the Fiumetto, and then continued further south, following the route of the current via Tonfano, from which it took its name; it then flowed out at the height of the current pier. During the Second World War its silting up began, which then led to the complete disappearance of the river. Only the stretch parallel to the Fiumetto was spared, but it was soon diverted and channeled into the latter.
In the coastal area Tonfano has low and sandy coasts.

Economy and tourism
The economy is based on seaside tourism, which began as early as the 1920s and resumed after the Second World War.
The bathing establishments at the beginning were simple huts placed on the beach, until they became modern tourist stations equipped with cabins, tents and umbrellas.

Festivals and traditions
In the first days of June, the patron Saint Anthony of Padua is celebrated with the “blessing of the sea”, a religious event that began in 1933, the year in which the church was dedicated to the saint. The festivity is celebrated in the parish church of Sant’Antonio da Padova in Tonfano: the churchyard is decorated with flowers, and it is believed that the blessing of the sea and boats brings protection to the maritime areas, its inhabitants and boats. The “Marina in fiore” fair, on the other hand, takes place in May to welcome the spring season.
Most of the stalls set up along via Versilia and viale Carducci sell flowers and plants, but there are also food stalls, stalls of used books and various types of handicrafts.

Historic places and places of interest
The Caffè Margherita, located at the beginning of via Versilia, is a historic bar of the twentieth century. From a bar it first became a restaurant and then a hotel, finally a restaurant for dinners and aperitifs. Approaching via Catalani you come across “la Pinetina”, the historic amusement park of Tonfano which, especially in the summer months, attracts many children and teenagers.
The main attraction of Tonfano is the pier: built for tourist and recreational purposes, it is 380 meters long, 214 at sea, and 5.64 wide.
Work began in December 2003 and continued in autumn 2005. The wharf was inaugurated on 14 June 2008.
Various sculptures are placed on the pier, in honor of the artistic vocation of the city of Pietrasanta; it ends in a decagonal square which has a sumptuous fountain in the centre.
Before its construction, Tonfano was already equipped with a small wooden jetty, which however, during the Second World War was blown up by the Germans, frightened by the idea that it could serve as a goods unloading.