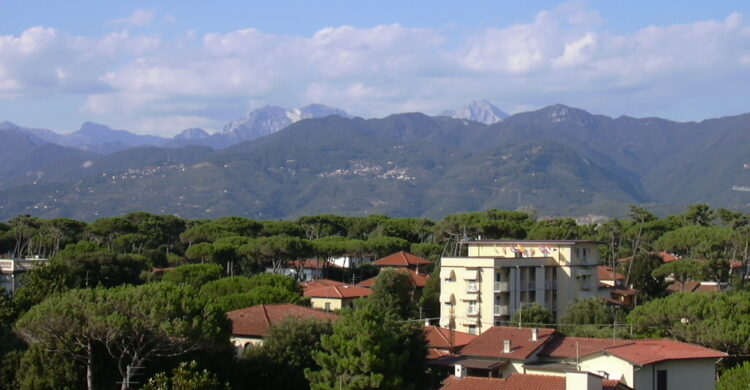 Marina di Pietrasanta is a fraction of the municipality of Pietrasanta, on the Versilia coast, in the province of Lucca.

This hamlet extends along the coast of the Tyrrhenian Sea overlooking Pietrasanta and includes the 4 km of coast between Forte dei Marmi and Lido di Camaiore. Marina di Pietrasanta is divided into four areas, which are (listed from north-west to south-east): Fiumetto, Tonfano, Motrone and Le Focette.

History
Already in the early thirties Marina di Pietrasanta was a well-known seaside resort, so much so that despite having a population of approximately 2000 people it could accommodate about 900 tourists in hotels and the same number in rented houses.

At that time this hamlet was scarcely urbanized: in the area closest to the sea there were bathing establishments, which were mostly made up of simple wooden cabins with terraces and sheds (now practically disappeared), the buildings were crowded along the road coastal road and in small agglomerations for each of the four areas listed above.

The area was mainly characterized by large and thick pine forests of which a faint trace remains in the area on the border between Motrone and Focette, along the north bank of the Motrone ditch (or Baccatoio torrent).

Tourism and beaches
Even today the main form of livelihood for the population of Marina di Pietrasanta is tourism.

In particular, this coastal area continues to be a renowned summer destination thanks to the wide, clean and perfectly equipped sandy beaches.

In Marina di Pietrasanta there are numerous historic social clubs, most of which overlook the sea: remember, for example, the famous Bussola Versilia, the Twiga, the Seven Apples, the Nikki Beach. The famous Canniccia disco overlooked the Aurelia, now demolished, boasting the distinction of being the first bio-disco in Italy (it had 4000 square meters of garden and a lake).