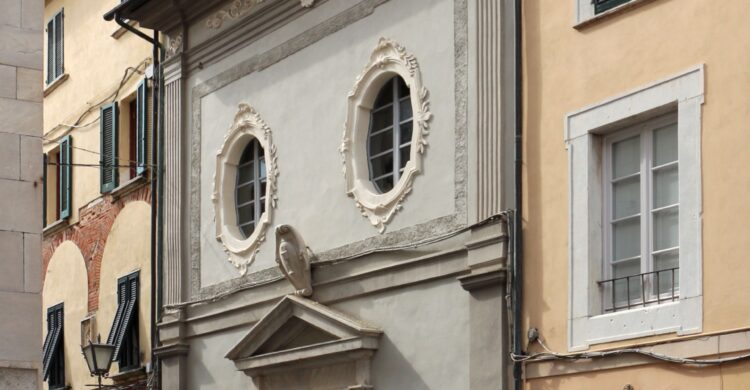 The Oratory of San Giacinto or Baptistery is a Catholic place of worship located in Pietrasanta, in the province of Lucca, in via Garibaldi, to the right of the collegiate church of San Martino.

Built between 1604 and 1615, the building is commonly referred to as the Baptistery because there are two imposing baptismal fonts, but until the 19th century it was the seat of the Compagnia del Santissimo Sacramento.
From 1777 to 1782 the oratory was totally renovated. With the suppression of the brotherhoods in 1786, ordered by the Grand Duke Pietro Leopoldo, the oratory passed to the Opera del Duomo which moved the two baptismal fonts there.

The oldest font (1389) has a hexagonal basin with allegorical representations of six Virtues and is attributed to Bonuccio Pardini.

The other source, a tabernacle, was entrusted in 1509 to Donato Benti and Nicola Civitali but remained unfinished; the cup with the elegant marine frieze was reused a century later by Fabrizio Pelliccia and Orazio Bergamini who executed the foot and the temple roof (1612) completed by small bronze sculptures and the Redeemer by Felice Palma (1615).

The only remaining work of the original seventeenth-century layout is the altarpiece by Filippo Martelli which represents the Eucharist and adoring angels (1636). In the 18th century Giuseppe Maria Castelpoggi from Carrara sculpted a new altar, the balustrade and the stoups.

The vault and the walls are decorated with episodes from the Life of Christ and Mary by the Cremona painter Pietro Cavatorta, restored in 1988. One can observe the central scene with the Glory of the Virgin, the remaining part of the architectural background, frescoed medallions with biblical scenes , fragments of the Triumph of the Blessed Sacrament in the apse and figures on the side walls and in the choir loft.