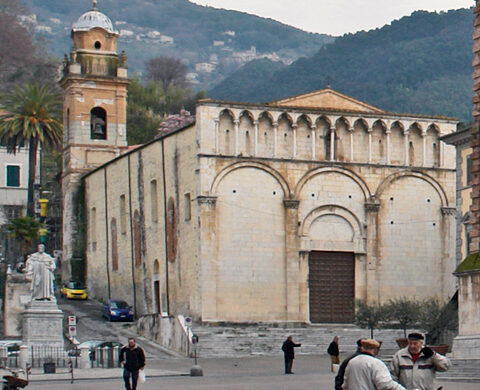 The church of Sant’Agostino, with the adjoining convent, is a sacred building located in the main square of Pietrasanta.

The church, attributed to Antonio Pardini, was built in the 14th century for the Augustinian friars. The 16th century convent and the Merchant Hospital were annexed to it.

The beautiful facade takes up the architectural motifs and plastic decoration of the Cathedral of San Martino in Lucca. Elevated above a short marble staircase, it has three large blind-bottomed arches, surmounted by an order of slender columns and Gothic trefoil arches.
In the lunette of the portal is the Annunciation, bronze by Igor Mitoraj (2013).

The interior has a single nave, with a trussed ceiling. The floor is arranged on various levels, adapting to the slope of the land.
The original altars, erected between the fourteenth and sixteenth centuries, have been replaced by the current ones in marble, from the seventeenth century, with the exception of the first altar on the right, from 1512: on it was placed a Nativity (1519) by Zacchia the Elder. The canvas, stolen in 1921, was dismembered by thieves and only partially recovered. The crowning lunette with the Pietà remains today.

Numerous tombstones on the floor and fragments of fresco cycles from the 14th-15th century remain from the first construction phase. The eighteenth-century mural decoration has been recovered on the wall of the main altar, on the counter-façade and on the right wall.

In the apse there is a valuable wooden choir. The bell tower, dating back to 1780, hosts a concert of three bells (plus a small bell) melted in 1904 by Raffaello Magni and sons of Lucca, which no longer make their voices heard since the entire complex was deconsecrated.

The convent was built in the 16th century. Its cloister is surrounded by a peristyle of marble columns. In ancient times the ambulatory of the cloister was completely decorated with frescoes by the Sienese Astolfo Petrazzi in the lunettes with episodes from the life of Saint Augustine. Today of the seventeenth-century decoration only the frescoes of eight lunettes remain.

Following the Napoleonic suppression of the monastic orders, both the church and the convent became the property of the municipality. After the Restoration, the convent housed the Piarists’ school. The church, after the departure of the Augustinians, continued to be officiated for some time.

Today the complex is deconsecrated. Recent restorations of the church and convent have saved the degraded structures which are now used for temporary exhibitions, especially in the summer months.

The cloister is home to the L.Russo cultural centre, the G.Carducci municipal library and the museum of sketches.