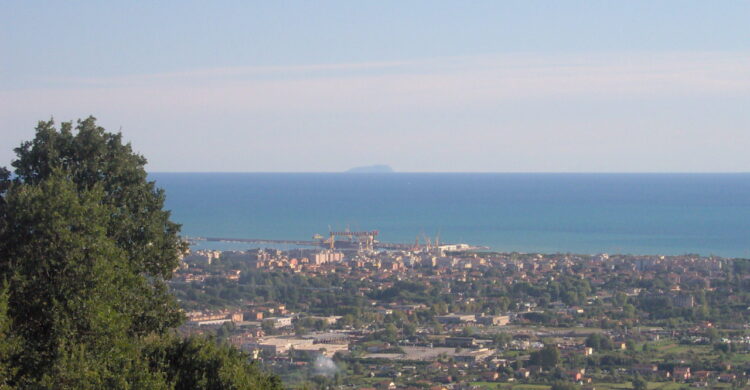 Marina di Carrara is a seaside resort on the Apuan coast, part of the municipality of Carrara, known as a holiday resort. The hamlet is part of an urban agglomeration interspersed with pine forests and parks, which extends seamlessly between the sea and the center of Avenza, where the Carrara-Avenza railway station is located, while to the west it joins the Ligurian town of Marinella of Sarzana.

History
Marina di Carrara, formerly known as Marina di Avenza, was born by the will of the Duke of Modena Francesco III. The first attempts to build a secure port of call at Marina di Avenza date back to the 18th century and were made by the Estensi family, who commissioned the English engineer Eng. Aschenden, sent directly by the British Government to which Francis III had asked for funding.

The adverse historical events did not allow the construction of the work, but the Dukes of Modena did not give up the attempt to revitalize the Carrara coast in which they had the only outlet to the sea; in 1833 the government arranged for a summary subdivision of the coastal area and assigned, free of charge, the building land.

Despite these “incentives”, however, demographic development stagnated and the same happened for the structures necessary for the embarkation of the marbles: the small Este fleet continued to be without a port and without a sufficiently secure mooring.

It was an Englishman, the industrialist Guglielmo Walton, active for many years in Carrara, who in 1851 had the first large pre-port structure designed and built: a long loading wharf which finally allowed ships to dock fairly easily. Naturally, the intensification of traffic also favored demographic development: a sign of the new needs linked to this aspect of reality was the construction of a large parish church, begun in 1857 and completed many years later.

Village
From west to east, between the port area and the border with Liguria, the town has a large sandy beach equipped with umbrellas and cabins, which for most of the extension is managed by private bathing establishments.

The urban fabric is interspersed with large pine forests, typical of the coastal towns of Versilia, and the Municipality of Carrara has a very ambitious project to make the area of Villa Ceci, an ancient late 19th century residence, immersed in a large green area, a park .

From an industrial point of view, the Nuovi Cantieri Apuania are worth mentioning, which for several years have specialized in the construction of cruise ferries, reaching levels of excellence.

Of notable interest from a tourist point of view is the Nautical Club, which over time has produced important personalities of sailing: from Luca Santella to the Chieffi brothers to Paolo Bottari. It is an easily accessible and equipped landing point. Also relevant are some 20th-century buildings, such as Villa Giampaoli, a condominium in via Venezia and the Squassoni condominium close to Via Nuova del Mercato, now Via Fiorillo, and Via Nazario Sauro, the ancient Via delle Capanne. Then there is, at the entrance to the port, the monument dedicated to the buscaiol (a day laborer, normally assigned to heavy work in the port or in the marble quarries).

In Marina di Carrara there is an imposing trade fair complex capable of hosting exhibitions and reviews of all kinds, including the September Fest in which a delegation from Ingolstadt, a Bavarian town twinned with Carrara, participates. In 1977 an episode of Games Without Frontiers took place there.

During the Second World War, in the period of the German occupation and the Italian Social Republic, the Sgatti family hid and protected from deportation in their home in Marina di Carrara a thirteen-year-old Jewish boy, the son of Vitta friends from Milan, making him pass for an escaped refugee from the war zones of Southern Italy. For this commitment of solidarity, on December 14, 1981, the Yad Vashem Institute in Jerusalem awarded the high honor of the righteous among the nations to the spouses Alessandro and Irina Sgatti and their daughter Luce Sgatti Vannucci.

Religious buildings
•Church of the Holy Family, created a parish in 1886.
•Church of the Santissima Annunziata, consecrated in the second half of the nineties to deal with the urban and demographic development of the northern part of Marina di Carrara.
• Oratory of Christ in the Cross, the original church in the northern part of Marina di Carrara, before the Church of the Santissima Annunziata was built. Still belonging to the
• Parish of the Santissima Annunziata. It is inserted during the Good Friday procession in the route of the Via Crucis which winds along the urban fabric.
• Oratory of San Giuseppe, built in 1776 and donated to the new parish of the Holy Family in 1840 for the religious needs of what was then a small fishing village. Today used for various parish uses.
• Oratorio di Sant’Erasmo, prior to the 17th century, was dedicated to the patron saint of sailors. Disappeared before 1822, the picture of its high altar is today in the Church of San Pietro in Avenza.
• Oratory of Santa Maria Vergine, owned by the Del Medico counts, still existed in the 19th century.
• Oratorio di Santa Croce, a public oratory owned by the Monzoni counts, built in the 18th century, is now private and dedicated to Saints Prospero and Modesto.