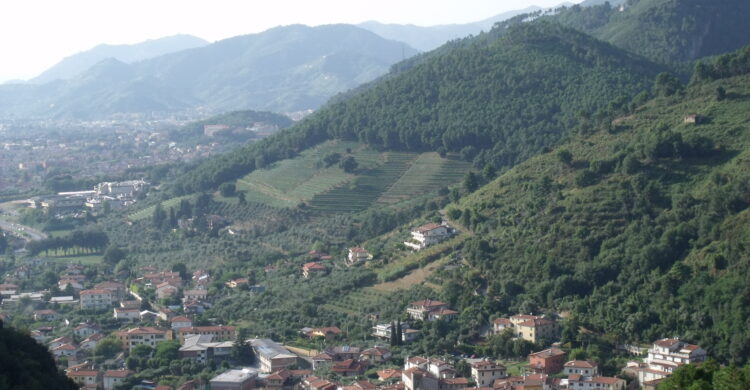 Territory
Montignoso lacks a common centre, but each hamlet has its own particular independence from the others. The Town Hall is located in the locality of Piazza, but the hamlet that has the most inhabitants and which sees the greatest presence of shops is that of Capanne. Cinquale is the hamlet with which Montignoso overlooks the Tyrrhenian Sea; here for some years there has been a modern tourist port (porticciolo del Cinquale). Renella represents the “sport citadel” of the municipality; in fact, the municipal stadium is located in this hamlet. The municipality was part of the Alta Versilia Mountain Community.

History
The ancient feudal castle of Aginulfo, today Castello Aghinolfi, located on the hill of the current centre, was the first modern settlement of the town. Strategic military observation point, first of the Ligurian Apuans, then as a “watch tower” during the Roman expansion towards Gaul (Julius Caesar) and later an outpost of the Byzantine territories of Lunigiana, it was built with the typical octagonal keep of Lombard origin , probably at the time of Autari, Agilulfo and Teodolinda.
Indisputable historical information dates back to the year 753, when Astolfo, king of the Lombards, gave his brother-in-law Anselmo, founder and first abbot of the Nonantola Abbey, an olive grove at the Aghinolfi Castle in order to supply oil for the lights of the Church .
Seat of a powerful noble coterie towards the end of the 10th century Montignoso was partly owned by the bishop of Luni. From the 13th century it became the permanent seat of the nobles of Corvaia and Vallecchia who rebuilt the fortress in that territory called Massa Versiliae (Versilia Massese).

Contested between Pisa, Lucca, Genoa, Florence, from the XIII century it was annexed to the domains of Lucca in the vicarage of Pietrasanta. Montignoso remained a possession of Lucca even when Pietrasanta was conquered by the Florentines in 1514, essentially becoming an exclave of Lucca. After a bloody clash in 1538 with Massa, the fate of the center remained unchanged until the French revolution.
Until the 18th century, the Republic of Lucca took great care of the ancient castle, which was modernized and took the name of Fortezza di San Paolino (from the name of one of the patron saints of the city of Lucca).
Napoleon left the territory under the Lucchese government of the Baciocchi, who took care to reclaim the marshes from the coastal strip.

After the Congress of Vienna Montignoso remained in the Duchy of Lucca until 1847 when, following the Treaty of Florence, despite widespread discontent, it was ceded to the Duchy of Modena and Reggio, to which it remained united until the unification of Italy.