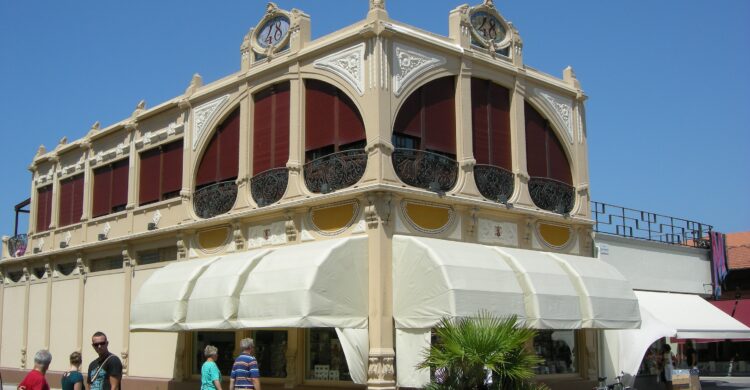 Magazzini Duilio 48 is a commercial building located in Viale Regina Margherita 25 in Viareggio.

The Bazar Duilio 48 represents, together with the Caffè Margherita, the Bagno Balena, and some other buildings, one of the most significant and representative examples of Viareggio architecture of the 1920s.

History
Design
The building was built between 1927 and 1930 following the urban restructuring of the seaside area necessary after the devastating fire that hit Viareggio in 1917, destroying numerous wooden buildings and bathing establishments in the early years of the twentieth century. The remaining wooden buildings were demolished to make room for the new masonry ones, decided by the government commission set up in 1924 which also included the architects Alfredo Belluomini, Ugo Giusti and the painter and decorator Galileo Chini. However, the name of the designer has remained unknown until now, given the lack of indication of the designer in many of the building practices presented at that time, bearing on the drawings only the signature of the owner or builder of the work.

Commercial activity – Giuseppe Siebzehner
Magazzini Duilio 48 in Viareggio was one of the branches (together with that of Montecatini) of the “Emporio Duilio 48”, founded in Florence (in the current COIN building, in Via de’ Calzaiuoli) in 1902. The creator of the structure merchant and of the “everything for 48 cents” formula was Joseph (in Italian Giuseppe) Siebzehner (born in Vienna on 2 September 1863, died on the Milan-Auschwitz journey on the train that departed on 29 January 1944 from platform 21), merchant from a Polish family, originally from of Kańczuga (south-eastern Poland), married to Amalia Koretz (born in Plzeň on 15 March 1871 and died in Auschwitz), daughter of Ferdinand. Siebzehner, already active in the trade in Vienna at the end of the 1800s, took over the commercial activity called “Grande Emporio Duilio” and founded in Florence in 1888 by the Papalini brothers, who in turn had taken over the renowned “Bazar Bonajuti”, founded in the same established in 1834 by the architect (merchant’s son) Telemaco Bonajuti. The expansion of the Florentine site in 1907 gave rise to the new name “Emporio Duilio 48”. This was soon joined by the two offices of Montecatini and Viareggio; the latter was initially located in a counter where the renowned “Gabrielli” shoe store stands today, next to Magazzini 48. It also seems that since 1911 there were two stores in Bologna, again under the name Emporio Duilio. Finally, it must be said that Giuseppe Siebzehner was an avant-garde trader, perhaps the one who, at the time, was most ahead of his time in Italy. In fact, from the family archive (now owned by Count Federico di Valvasone and by his last descendant, Riccardo Francalancia Vivanti Siebzehner) it emerged that Giuseppe already had two exclusive contracts at the end of the 19th century. One with a manufacturer from Como of festoons, paper lamps and party decorations. The other, even more important, was stipulated in Bologna with the great artisan blacksmith Giordani who built tricycles for children, prams and bicycles and which later became a famous manufacturer of the latter, especially after the war. Giuseppe was even more avant-garde at the turn of the two wars, when he created the first catalog of mail order products, the forerunner of today’s “Postal Market”.

The business later passed into the hands of Giuseppe’s sons: Giorgio Vivanti Siebzehner (born in Florence on 24 September 1895 and died in Florence on 2 May 1952), lawyer and author of the “Dictionary of the Divine Comedy” and his brother Federico (born in Florence on 15 June 1900 and died in Florence on 16 May 1978), an electronic engineer who was among the first in Italy to conduct in-depth experiments on ceramic resistors at the Soc. Ceramica Italiana – Verbano, so much so that he earned the honor of Cavaliere al Merit of the Italian Republic in 1956. Over time the heirs Francalancia Vivanti Siebzehner, of Valvasone and Bemporad took over the property, until the sale of the commercial activity to COIN in 1988. The Viareggio building was instead sold in the 90s to the Fontana family, who will later open the “Liberty Store”, one of the most renowned record and video game stores in the city

Description
The building, with two floors above ground, still retains the intended use of the time, where the shop is located on the ground floor and the home on the upper floor with access from the original service staircase at the rear.

Rectangular in plan, it has undergone a small expansion in recent times, on the back, adjacent to the staircase leading to the upper floor, used as a service room. Internally the building has undergone several changes, especially in the in the planimetric layout, decorations and functional distribution, while externally the road elevations are well preserved compared to the original drawings, apart from the replacement of the windows of the shop windows on the ground floor currently in metal. The two elevations, one on viale Margherita and the other on via Fregoli, are characterized by a scansion of pillars which determine eight bays on the south side, five of which are closed in plastered masonry and three open as display cases and three bays on the east side , of which the central one is the entrance.

The building is characterized by a corner solution, where two large curvilinear windows are located on the first floor, divided into three parts by pillars that start from the underlying base; the beautiful windows are enriched by wrought iron railings of remarkable workmanship placed as a parapet, while under a horizontal stringcourse supported by worked shelves it marks the separation between the floors.

At the end of the building, aligned with the two large corner windows, there are two signs in the shape of ovoli in colored glass.