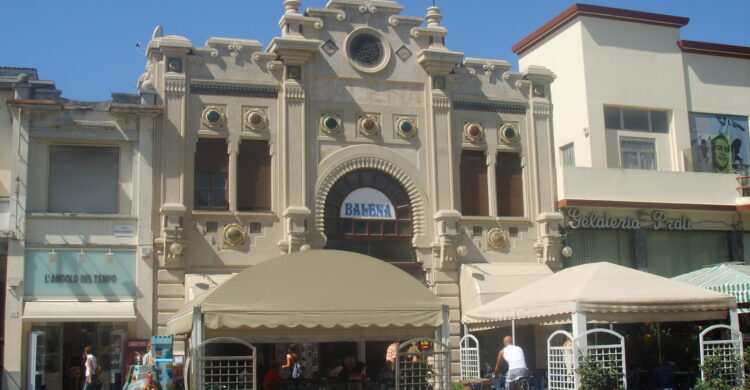 Bagno Balena is a building located in Viale Regina Margherita 42 in Viareggio.

History
Built at the end of the 19th century, Bagno Balena appeared as a construction made entirely of wood of considerable size characterized by the large arch that marked the main entrance to the bathing establishment.

In the early 1920s the coastal lands along the waterfront passed from the Maritime State Property to the Municipality, and therefore the need was recognized to set up a Special Commission with the task of reorganizing the beach area from an urban point of view in which there were still some wooden buildings still standing miraculously saved after the fire of 1917. With the new regulation, which decreed the demolition of buildings no longer suitable for the new hygienic requirements, in 1928 the construction of the new Bagno Balena entrance in masonry began, based on a design by the architect Alfredo Belluomini, who was in turn also a member of the aforementioned Commission.

The buildings located at the back of the entrance to the bathroom on viale Regina Margherita were built shortly after as services for the bathing establishment and are currently occupied by the restaurant. Located on viale Regina Margherita, in the seaside conservation area, the triumphal entrance to Bagno Balena represents one of the most beautiful and interesting examples of late Viareggio liberty. It should be remembered that in the thirties the structure was purchased by the Matteoni family, in addition to it numerous other buildings of historical architectural importance, such as the Colombo hotel in Lido di Camaiore, which made the name of the “Bagno Balena” become famous. in the person of Tommaso Matteoni. The factory was then sold in the mid-nineties at the behest of Tommaso Matteoni himself, while the building is still owned by the family.

Description
From the characteristic monumental entrance, the Balena bathroom highlights at first sight an eclectic aspect that the designer, Alfredo Belluomini, together with the painter and decorator Galileo Chini have modeled in the monumental mass of the building.

Built in 1928, the Balena rises on two floors above ground, and is made up of a main building body, which overlooks Viale Regina Margherita and two lateral bodies built in the rear part towards the beach.

In the building, arranged in a U-shaped plan, the main body houses shops on the ground floor and apartments on the upper floor, while in the secondary one, at the back, there is a restaurant on the ground floor. Interesting is the main elevation where the entrance to the plant is located centrally so as to divide the entire volume into two symmetrical bodies.

On the ground floor, the two large lateral openings, where the shops are located, are surrounded by a faux ashlar facing which is smooth in the upper bands, while the large arch which underlines the monumental entrance is characterized by an indented ring nut; inside the gallery, covered by a barrel vault, there are decorations on the plaster in conditions of advanced deterioration.

In line with the windows on the first floor, above the architraves, are two decorative ceramic roundels, aligned with the other three located above the entrance gallery. In the central band, again on the main façade, interesting geometric decorations by Galileo Chini alternate, while in the final part of the building there is a central rose window in colored glass.