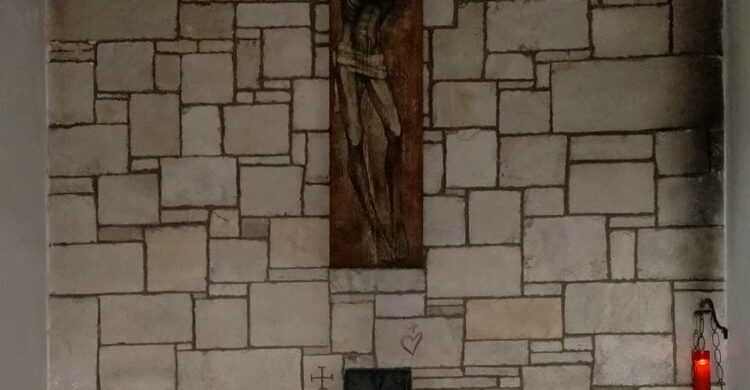 History
The building originally housed the Maritime Health Station, erected after the First World War and the subsequent one due to the Spanish flu.

During the Second World War this infrastructure was abandoned and in a short time it began to fall into very bad conditions.

In 1955 Don Sirio Politi (1920-1988), a worker priest, arrived in Viareggio and obtained permission to build a chapel with a small rectory here. The church has never been dedicated according to canonical and liturgical norms, therefore it is not registered to any saint.

Since 2002 the ashes of Don Sirio Politi have been kept in this church.

Description
The building, conceived as an expression of the devotion of fishermen and portal workers, includes the church, a small rectory and a red brick belfry, restored in 2006. The interior of the church, with a single nave, is in sailor: the benches are made of massive wooden planks and naval chains, the stoup is a large shell, there is a statue of the Madonna to which an anchor acts as a pedestal. There are no side altars and the walls are white and bare, with the exception of the background one which is made up of travertine scraps with painted red religious phrases and symbols. On this wall is the iron tabernacle, whose door is decorated with two pieces of chain welded together to form a cross. The altar is a block of travertine, similar to that of which the edges of the Viareggio piers are made, and is surmounted by a crucifix on painted wooden tables.

The external wall of the architectural complex, which overlooks the Burlamacca canal, is painted by the large mural Il Cristo dei Pescatori, created by Menghino (Giovanni Lazzarini). The church is surrounded by a public park, once known as Parco della Pace, today Piazza Medaglie d’oro di long navigation.