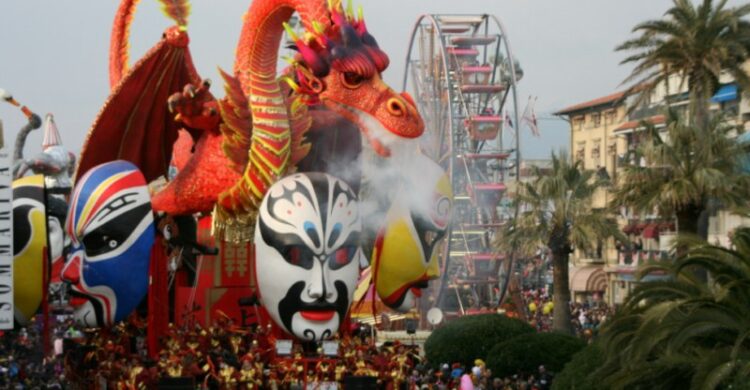 The Carnival of Viareggio is considered one of the most important carnivals in Italy, Europe and the world. The allegorical floats, which are the largest and busiest in the world, parade along the Viareggio promenade. The allegorical works, through satire, address the great themes of the contemporary world: from national and international politics to the environment and society.

History
The tradition of the parade of floats (first carriages) in Viareggio dates back to 1873 and it is believed that the idea of a parade on Shrove Tuesday in 1873 was born at the tables of the Caffè del Casinò, inaugurated forty years earlier. At the end of the century, the triumphal chariots appeared, real monuments, built in wood, scagliola and jute, modeled by sculptors and put together by carpenters and blacksmiths who, in the Darsena, on the slipways of the shipyards, knew how to create extraordinary boats.

The First World War led to a war lull that lasted six years. The demonstration resumed in 1921 and the floats paraded on the two Viali a mare.

In 1921 the first official song was sung, known as the ‘Cup of Champagne’, the current Carnival hymn, composed by the musician Icilio Sadun on words by Lelio Maffei. That year for the first time, even the carts came alive with music, because the band found a place on board the building entitled “The wedding of Tonin di Burio” by Guido Baroni, which represented the wedding party in the farmyard of a farmhouse. Two years later the Pierrot chariot was the first mask to move its head and eyes. In 1925 the painter Antonio D’Arliano invented the technique of tracing paper, which has since allowed colossal constructions. In 1930 Uberto Bonetti conceived Burlamacco: the symbolic mask of Viareggio, which, in the 1931 poster, appeared in the company of Ondina, the symbol of the summer bathing season. From the beginning (1954) first the newborn Rai, and then Eurovision (1958), have consecrated the great event, transporting Viareggio and the Carnival everywhere, over the air.

On 20 February 1971 the first local carnival of the Darsena took place.

Today the Carnival of Viareggio is an event of international renown. Every year the Masquerade Courses, i.e. the parades of allegorical floats, take place in the period between the end of January and the beginning of March and over 600,000 spectators take part.

Papier-mâché
Papier-mâché is a preparation essentially made up of water, glue, plaster and paper; the manufacturing process starts with the creation of a clay model. With a casting of plaster on this model, the negative of the mold is obtained, inside which the strips of paper that have been previously soaked in a mixture of water and glue are applied. Thanks to this material, the tankers are able to shape very large masses and volumes and, thanks to the lightness of the empty shapes, the tank is a spectacular self-propelled structure. The strips are then made to adhere to the cast, which then needs many hours to dry.

The papier-mâché work is then detached and, after smoothing it with sandpaper, we proceed with the decoration with acrylic or tempera colors, which are covered with a further glossy protective varnish. The first papier-mâché wagon was made in Viareggio, in 1925: “The Knights of the Carnival” by Antonio D’Arliano. Currently one of the recognized great papier-mâché masters is Arnaldo Galli who, together with his brother Renato and Silvano Avanzini, has collaborated for the construction of stage materials in Federico Fellini’s films such as Casanova and Boccaccio ’70, building an Anita Ekberg of enormous measures. Papier-mâché masks by the masters of Viareggio were the setting for the opening ceremony of the Italy ’90 World Cup and for the closing ceremony of the XX Olympic Winter Games.

The Citadel
The Citadel of the Carnival is the largest theme park in Europe dedicated to masks. It is located in the north of the city. The 16 hangars in which the floats and masquerades are built overlook the large elliptical square named after Burlamacco. It was inaugurated on 15 December 2001 according to the project by Francesco Tomassi.

In 2017, the “Espace Gilbert” exhibition space was inaugurated in which elements of the great floats of the past are exhibited. In 2019 the ground floor of the new layout of the Carnival Museum was inaugurated. Through the artistic testimonies from 1500 to 1873 the “upside down world” typical of the Carnival in the celebrations in Europe is told. The first floor, on the other hand, tells the Viareggio Carnival through a selection of original models and sketches. In the Citadel there are also papier-mâché workshops where children and adults can learn the manufacturing techniques.

In summer 2020, the graphic project of gigantic murals on the doors of the wagon hangars was carried out, signed by the architect Paolo Riani and created by Ati, the temporary association of five artisan companies of the Carnival of Viareggio. A complete transformation of Piazza Burlamacco, in the center of the Citadel, which identifies itself even more in the agora of art, through a large temporary exhibit, to be admired only “here” and “now”, precisely in the spirit of the Carnival. A large open-air exhibition with sixteen details of the most beautiful posters in the history of the Carnival, painted on the facades of the sheds, which house the allegorical floats and the museum hangar, for a total area of two thousand square metres. On 16 February 2021 (Mardi Gras) the new Historical Archive was inaugurated on the second floor of the museum area, dedicated to the conservation of original documents and sketches.

Carnival and art
The relationship between the Carnival of Viareggio and art has always been very close, as evidenced by the numerous contributions of artists including Lorenzo Viani, Renato Santini, Uberto Bonetti, Sergio Staino, Dario Fo and Jean-Michel Folon. Lorenzo Viani, illustrious painter from Viareggio, who wrote illuminating pages on the Carnival, actively contributed in 1911 to the creation of Domenico Ghiselli’s “The Triumph of Life” chariot, of which we have evidence of the decoration with a gallery of allegorical figures of the panels of the base .

Renato Santini, another painter of the city, approaches the world of papier-mâché in 1924, on the occasion of the preparation of the masks for the Carnival of Viareggio; he made numerous floats starting from 1947 (“Teatro della vita”) up to 1956 with the float “A tempo di mambo”.

Among the most recent signatures we mention that of the Nobel Prize Dario Fo who collaborated with Umberto and Stefano Cinquini, who describe the brutality that war produces on children during the creation of their inspired chariot; that of Jean-Michel Folon, a recently deceased Belgian artist, who with his famous pastel colors signed the official poster for the 2000 Carnival.

Celebration and tradition
The whole carnival is accompanied by balls and masked parties that have ancient origins, well before the birth of the masked courses. In the 1920s “colored” parties were famous, parties in which women had to wear a dress of the indicated colors, while men wore a tuxedo, the decorations, confetti and streamers were in the prescribed colours. Places such as the Principe di Piemonte, the Royal hotel and the Cafè chantant Margherita on the Promenade were the ideal venue for this type of party and it was in this last place that the tradition of costume parties began in 1932 with an “eighteenth-century powdered dance “. In the years to come we remember the parties of La Stampa, the Red Cross and the Lions, the latter non-profit associations that often and willingly participate actively in the life of the Carnival even today. Today the veglioni are local parties during the weekends of the masked courses on the seafront. They are street parties accompanied by music, masks and lots of fun.

Rioni
At the same time as the carnival period, the Rioni del Carnevale of Viareggio are held in the city districts. These parties are the most popular part of the Viareggio Carnival. Entire neighborhoods, on festive weekends, are transformed into open-air sambadromes where you can dance freely in masks, but also dine while delighting yourself with the typical dishes of the Viareggio tradition (starting from 7pm). In particular, the Marco Polo and Darsena districts organize the night parties, which have been organizing the five nights of CarnevalDarsena since 1970

Carnival Museum, Viareggio
The Carnival Museum tells the world upside down and the history of the art of building allegorical machines. On the ground floor the bookshop and the time line with the artistic testimonies of the Carnival in Europe from 1500 to 1873. On the first floor the history of the Carnival of Viareggio through models of floats, original sketches and elements of the floats themselves. The Museum is completed by the Espace Gilbert, where in addition to the great 13-metre dancer who won in 2004 there are parts of the floats of the past.

The World Youth Football Tournament
A float from 2007 depicting the soccer world champions.
During the carnival period, one of the main events is also the “Coppa Carnevale” youth soccer tournament, also known as the Viareggio Tournament, born in 1949 on the initiative of the C.G.C. Viareggio. The initial idea dates back to 1948, when there was a city tournament for ten teams representing four companies and six bars. Since the first edition, the tournament has been characterized as “under 21” and gradually over time it has acquired more and more prestige at an international level, with the arrival in Viareggio of extra-continental teams. In 1978 he participated in the tournament a team from Beijing and this represented the first sporting contact of communist China with Western Europe. The winning teams of the most editions are Milan and Fiorentina, with 8 triumphs each.