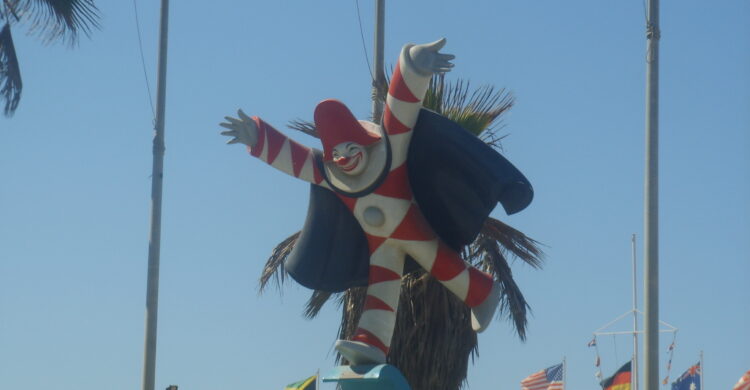 Burlamacco is the official mask of the Viareggio Carnival and mascot of the city.

Etymology
The name Burlamacco, a reference to the carnival “burla”, has various origins: “Burlamacca” is the canal that crosses the city of Viareggio. Another hypothesis, but rather distant, is that which sees the name Burlamacco approaching that of a fictional character, the Renaissance Buffalmacco, one of the protagonists of Giovanni Boccaccio’s Decameron. One of the most accredited versions is that of the pseudonym that its author used in certain works. Another hypothesis is that Burlamacco derives from Francesco Burlamacchi, politician of the Republic of Lucca. The hat wearing the mask is that of the Lucchese ambassadors and the colors of Burlamacco recall those of the municipality of Lucca.

History
It was created in 1930 by the futurist painter and graphic artist from Viareggio Uberto Bonetti, together with his partner Ondina (a young bather typical of those years), to convey the well-known event on the advertising poster of the 1931 edition: thanks to its immediate popularity it soon became the ante-litteram logo of the Versilia Carnival. It is a set of characteristics of the main Italian masks of the time: thus we have Rugantino’s hat, Doctor Balanzone’s cloak, the Harlequin-style checkered costume, the white gorget a la Capitan Fracassa (or Capitan Spaventa) and the white button of the Pierrot French. After its first appearance, the mask remains nameless for 8 years. Over time the Burlamacco evolves, transforms and updates itself while always remaining faithful to the initial model and with him also Ondina, his companion already from the poster of ’31, which appears and disappears on and off in the carnival posters of Viareggio, becoming also a mask. On 21 December 1988, Burlamacco entered the National Museum of Popular Arts and Traditions in Rome as the official mask of the Viareggio Carnival. A monumental figure in tracing paper by Burlamacco is exhibited at the Musée de l’Homme in Paris.

Description
It is characterized by a futuristic-style tubular suit with red and white diamonds (the typical colors of the umbrellas present in the bathrooms at that time), a white pompom on the belly, a tall red hat, black cape and face made up like a clown, evoking laughter and the joke. Later Bonetti himself presented some variations of the mask, always on the Carnival advertising posters, among which we remember the pop art version of 1967 and the postmodernist one of 1980, but the classic version is the best known and is the one that has now crystallized in the tradition.