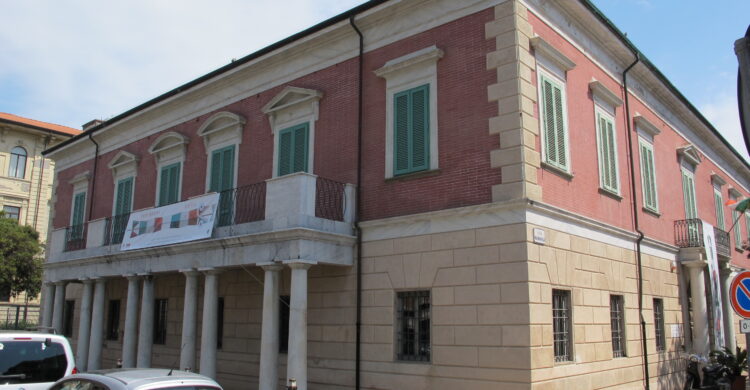 Villa Paolina (or Palazzo Paolina) is a historic building, located in the city of Viareggio, which belonged to Paolina Bonaparte, Napoleon’s sister.

The villa was built in 1822 on the seashore in front of the place (now Piazza Shelley) where, according to legend, the sea returned the body of the poet Percy Bysshe Shelley, who died in Viareggio that same year following a shipwreck; Paolina was very fond of her poems and it is said that she chose the place of construction for this very reason as well as for its proximity to the sea.

The villa, also called “The refuge of Venus”, was inhabited by the princess immediately after its construction in order to be able to live near the man she loved, the musician Giovanni Pacini. Paolina’s place of retreat after the death of her brother Napoleon, it was a place of culture as the princess loved to surround herself with artists and musicians.

The villa, which with the expansion of the city over time has now become an integral part of it, was reopened to the public after the restoration and houses the “Civici Musei di Villa Paolina” and the art gallery dedicated to contemporary art.

History
On May 22, 1822, 220 square arms of land in the northernmost part of the city were assigned to Paolina Bonaparte directly by the Duchess of Lucca for the construction of a “palace with corresponding garden”. Paolina effectively separated from her husband Camillo Filippo Ludovico Borghese, prince of Sulmona and Rossano, was in fact looking for her own residence and intended to build two villas, one in Viareggio and one in Bagni di Lucca. Short of money and tried by the death of her brother in 1821 she decided to settle in Viareggio.

The project dates back to the same year 1822, the work of Giovanni Lazzarini (1769-1834), from 1806 architect of the Napoleonic principality of Lucca and Piombino, established by Napoleon for his sister Elisa. Subsequently, the section of beach on which the building would overlook was also assigned to Paolina.

The construction works, which had already begun in 1822, ended in the spring of 1823 and Paolina lived there until 1825, when she moved to the Montughi residence near Florence for health reasons.

Upon the death of the princess, the villa in Viareggio passed to her sister Carolina Murat, who had other works carried out there, such as the creation of the internal decorative apparatus and the arrangement of the garden.

Between 1858 and 1870 Vittorio Papanti was the owner of the villa, who had it carried out an overall decorative renovation and the connection of the two wings of the building, leaving only the central atrium open and giving the building its current compact structure.

Later the villa was adapted to become accommodation for students of the Royal College of Lucca and further transformed in the 1920s into a public school, with a new subdivision of the internal spaces. Restoration interventions took place in 1958, immediately after the structural modifications imposed on the building by the change of use, and previously, on the facade, between 1902 and 1924. In abandonment since 1967 following conflicts of jurisdiction, the project restoration was started in 1988 by the municipal administration of Viareggio and the Superintendency of Pisa, after which it was reopened to the public.

Description
Architecture
The exterior of the villa is in the French neoclassical style. In the project, the building had a square plan on the ground floor made up of four modules, while the first floor was closed only on three sides with a loggia that opened onto the garden.

The building is divided into three parts: the main one used for the needs of Paolina and her guests, the one for the service personnel and services such as kitchens and pantries. The rooms are arranged around the perimeter overlooking three fronts (sea, street and garden) and the bedrooms and living rooms overlook the beach; with the subsequent closure of the loggia, a fourth facing was also created.

The facade towards the sea is composed of a terrace supported by a neoclassical style colonnade. The entrance is also formed by two Doric columns which support another small terrace.

Garden
The garden, surrounded by a wall that divided the building from the city, was enriched with exotic species, but disappeared during the changes it underwent. There was a coffeehouse, aligned with the villa, with an octagonal room in the centre, and a service building which included the stables, the coach house and the coachman’s and gardener’s quarters. In the garden there was also a theater with a stage, which was set up when the princess hosted shows and theatrical performances.

The garden was cut in two by an avenue that led up to the villa and separated it into two zones (east and west) set up completely different: the garden to the east was English-style with winding paths leading to the center where there was a pool; to the west was the garden planted with flowers, arranged in alternating circular and rectangular flowerbeds. Continuing further west, the building faced the coast through a road that led directly to the beach. The southernmost area was cultivated with vegetables, as well as including a vineyard and a greenhouse.

Decoration
Due to the numerous modifications it underwent, most of the decorations (paintings and decorated ceilings) and furnishings of the villa have now been lost, but it has nonetheless been possible to reconstruct a part of it on the basis of the paintings and annotations of the time.

The decorations of the interiors vary from the ground floor to the first floor, alternating different styles (Neoclassical motifs, with extensive use of marble in different shades, some of which are explicitly inspired by Pompeii; oriental motifs with scenes from Marco Polo’s journey to China, such as metaphor of the conquests of his brother Napoleon; Islamic motifs.

Most of the rooms on the ground floor, as well as the smaller ones on the first floor, were decorated in beige or white together with shades of green, as was the fashion at the time, all combined with architectural grids composed of Ionic columns. Some rooms recall some of the royal villa of Marlia (Lucca), which belonged to his sister Elisa.

The original furnishings of the villa were in the Louis XVIII style. With the move to Carolina he had to blend the Italian, English and French styles harmoniously with each other as in the other Carolina villas.

A painting wanted by Vittorio Papanti (1858 – 1870) called the Three Graces, depicts the three Bonaparte sisters (Paolina, Elisa and Carolina) together, in the midst of marine figures. There also remain draperies and decorations in an Egyptian style, to which oriental scenes had been superimposed. The decorations of the dining room are modeled on those of the Palazzo Ducale in Lucca. Paolina’s bedroom, on the other hand, was entirely upholstered in fabric.

Civic museums of Villa Paolina
“Alberto Carlo Blanc” Civic Archaeological Museum
The archaeological museum, founded in 1974, is housed in 9 exhibition halls for a dedicated area of 236 m² and a total of 433 exhibited pieces, with prehistoric materials from the archaeological areas of north-western Tuscany. The current exhibition, in a chronological sense, was adopted from 1994

“Giovanni Ciuffreda” Museum of Musical Instruments
The museum dedicated to musical instruments, inaugurated in 1994, can count on an area of 103 m² dedicated to the display of over 400 pieces, all forming part of a collection of musical instruments from Europe, Asia, Africa and the Americas, from various periods from the seventeenth century to the present day.