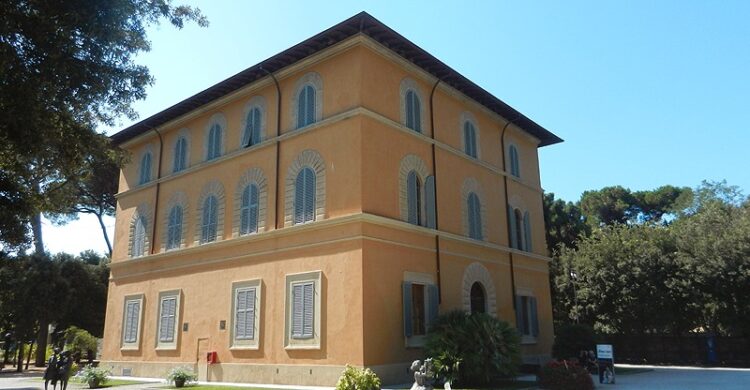 The villa is located within the large Versiliana Park which is the residual part of the ancient wood known as the Macchia di Marina, which extended along the entire coast and was owned by the Capitanato di Pietrasanta, which took care of its protection and used its timber resources on its own or on behalf of the grand-ducal government.

A view of the Fosso Versilia inside the park of the same name
At the end of the 18th century the wood was divided into farms to be granted to private individuals. During the 19th century the Digerini Nuti counts, owners of some plots of land, created a vast noble estate; in 1886 the villa was built, called La Versiliana by the writer Renato Fucini, often a guest of the owners.

In 1902 Gabriele D’Annunzio stayed there, who composed the lyric The rain in the pine forest.

At the time, the estate was a forestry agricultural complex, crossed by a dense network of paths with a geometric design. Stone pine was cultivated for the production of timber and pine nuts.

In 1980 the estate was purchased by the Municipality of Pietrasanta and used as a public park.

In the spaces adjacent to the villa, the areas for carrying out the activities of the La Versiliana Festival are set up, which has been held in the summer for many years with great success with the public and by now consolidated fame at a national level.