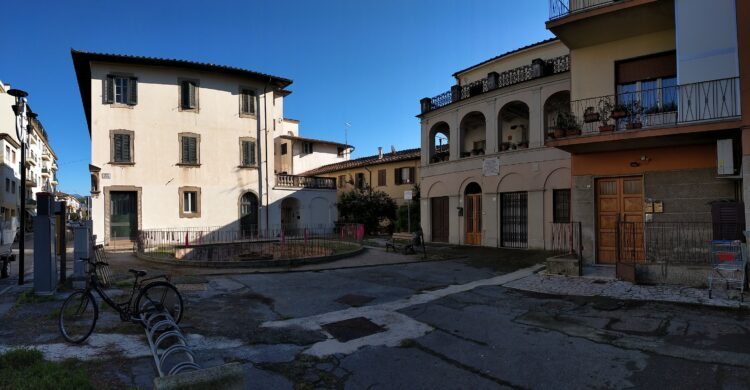 Piazza Ragghianti, is a small square located in the historic core of the city of Viareggio and dedicated to the violinist Ippolito Ragghianti. Inaugurated in 1549, it is the oldest still existing.

The previous name was Piazza delle Erbe, due to the fact that the market was held here in the late 16th century.

In 1592 a public cistern was built there consisting of a large covered well, enlarged in 1682. The base of this building was brought to light following a casual discovery during public works at the end of the 1990s. Today it has been recovered and is visible on the eastern side of the square. The traditional Ciottorini Fair has been celebrated here and in the opposite Piazza del Vecchio Mercato since 1755.

In 1900 the square, overlooked by the home of Ippolito Ragghianti, was named after the famous musician. The first parades of the famous Carnival of Viareggio started from Piazza Ragghianti (still Piazza delle Erbe at the time).

Description
The square constitutes an important urban historical memory and constitutes the crossroads of important city monuments such as the Church of the Santissima Annunziata, the Matilde Tower and the Palazzo Partiti Peccioli with its shrine of Sant’Antonio da Padova from 1752.

In the 18th century a white marble stele was placed surmounted by a statue of Sant’Antonio da Padova, patron saint at the time, with the Child Jesus. Although the base below the column has been removed, the monument is still present.

Finally, in front of the square there is a large stele of the Virgin Mary, erected after the war.

After various researches, it has been determined that the painting Country Life by Telemaco Signorini (1890/95) depicts Piazza Ragghianti.

In the square there is the only visible archaeological area of Viareggio.

All information relating to the painter and the Foundation dedicated to him can be consulted on the website www.fondazionecatarsini.com