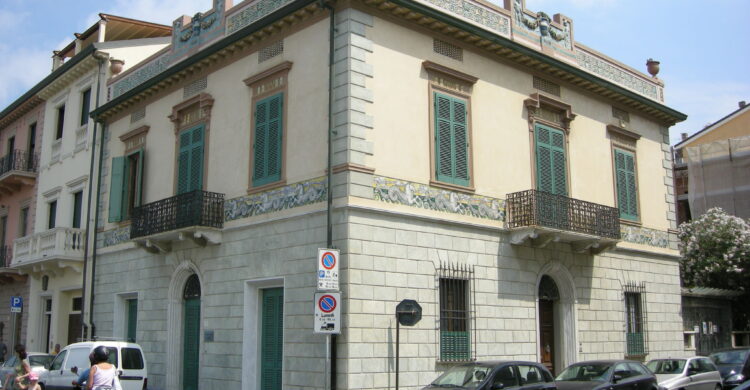 The Villino Tolomei is a stately home located in viale Manin ang. via Verdi, 20 in Viareggio.

History
In 1872, the construction area was still a beach, however affected by a subdivision that extended the existing roads towards the sea up to the construction of the avenue to the sea. In 1875, Luigi Nobili builds the rectangular lot, of which he has in the meantime become the owner, leaving about two-thirds of it as a courtyard, with a building facing Viale Manin which is similar in size to the current one.

In 1883 Nobili himself built, in the final part of the lot towards the mountain, a new building which was used as a stable and shed, and which corresponds to the current Pensione Valentina. In 1897, the building became the property of Margherita Di Linnenfeld who in 1899 built a new portion of the building, narrow and long, in adherence to the villa. Currently this part, devoid of particular architectural or decorative value, is reduced to a state of dilapidation and is functionally separated from the villa, constituting an entity in its own right. In 1906 the villa was sold to Countess Luisa Anna Karnick, then to Maria Lepsky, in 1910, and again to Sofia Gambogi Bertolli, in 1914, who remained the owner until 1979 when, by then in a state of extreme deterioration, it was bought by the notary Rodolfo Tolomei who, with extreme sensitivity and attention, restores it keeping its spirit intact.

The works commissioned by Sofia Bertolli in the 1920s and followed by the architect Alfredo Belluomini and the painter and decorator Galileo Chini, did not bring substantial changes to the organization of the spaces, limiting themselves to a work of decorative configuration, with the sole exception of the transformation of the two windows on the ground floor of viale Manin in porte, the repainting in white marble of the central door and the false ceiling of the living room which covers the existing cross vaults of the system. The most substantial works are of a decorative nature and consist in the creation of a string course frame in ceramic tiles, ceramic frames on the windows on the first floor and friezes on the parapet of the roof.

Inside, Galileo Chini himself may be responsible for the paintings that decorate the ceiling of the living room, which seem inspired by typical themes of the Viennese Secession, perhaps according to the indications of the client Sofia Bertolli herself.

Description
Villino Sofia, today Tolomei, clearly emerges from the urban context not only for its corner position, but also for its mighty squared volume, marked by the two almost identical elevations on the street, pivoted on the axes of symmetry constituted, one by corner between the two streets and the other in the median line of the individual fronts.

These squarings and geometric correspondences do not limit the decorative richness of the building, in the forms set by Alfredo Belluomini, who restructured it over the years by evaluating the aesthetic function of certain construction details, which indeed constitute, in certain cases, the starting point and the reason for the presence of decorations. The balustrade, for example, completely hides the slight slope of the roof, characterized as it is by continuous ceramic friezes from the San Lorenzo kilns, which Galileo and Chino Chini directed in the Mugello, and by three vases in the Baroque style, one of which is original and the other two faithfully reproduced, at the corners of the building.

Apart from the majolica friezes with phytomorphic elements with a spiral trend that cover the parapet, it is strongly marked by an element, in symmetry with the two main elevations, which represents an amphora from which festoons of garlands emerge held by two putti at the sides of it. Underneath the balustrade that simulates a non-existent terrace is a slightly projecting eaves with very close triglyphs whose presence, together with the balustrade, is anomalous but figuratively motivated by the fact that it thus accentuates the escape of the horizontal elements otherwise excessively diminished by a sense of verticality. The eaves then “joins” the two main elevations and gives them the image of a family building.

The other element that “holds together” the two elevations is represented by the fake ashlars that enhance the corner of the upper half of the house. Between the lower and the upper part of the facades there is a double stringcourse which contains a continuous frieze of polychrome ceramic tiles, also from the Chini manufacture, representing unusual seahorses which seem strangely to walk and not swim on stylized sea waves and in which, alongside the various lacquer colors are mixed with splashes of gold, recurring in Chini’s works. The lower part of the two fronts on the street has a faux ashlar cladding in cipollino marble, just slightly smoothed on the surface to have a finish of a color between green and slightly opaque yellow. This cladding was perhaps prior to the works carried out by Belluomini and very probably also the wrought iron parapets of the balconies which, like the railing of the internal staircase, appear to be of Umbertine taste. The doors and windows on the upper floor have a ceramic frame and a protruding front, added by Galileo Chini.

The building has undergone a recent work of conservative restoration aimed at preserving the original elements. Only the floors on the ground floor have been removed and completely replaced because they were rotting. It was decided to create a flooring in small white stones and white colored cement, giving each room a perimeter frame in black or yellow stone. The flooring in the kitchen was redone using the recovered one that was in the central hall made up of light and dark checkerboard marble tiles. Remains of the original flooring that was on the ground floor are now found outside the house. They are tiles of cm. 20×20 in colored cement handmade by the Tessieri company of Lucca.

In terms of distribution, nothing has changed: the three doors on viale Manin lead into three different connected rooms, while the door on via Verdi allows entry directly into the rather elongated hall, which offers a view of the staircase and which has a cross vaulted ceiling frescoed with multi-colored drawings probably prior to the works carried out by Belluomini and Chini.

On the right of the large entrance there is a living room, with fixed furnishings and very refined wooden furniture designed by Chini (also recently restored), which overlooks the courtyard now covered with an iron barrel structure and transparent plastic plates . This living room has a flat ceiling, lower than the others, with geometric decorations with intertwining lines, attributed to Chini. The kitchen which is located in the building to the right of the staircase has a cross vault without frescoes. The body of the building to the left of the hall has a central vestibule and two study rooms each equipped with a carved stone fireplace from the 16th century (installed by the current owners) and one in gray marble certainly prior to Belluomini’s works. The three rooms of this building have a vaulted ceiling frescoed with late 19th-century motifs and probably datable to the period of the original layout of the villa.

In correspondence with the stairwell there is a frescoed mess-tin skylight and at the base of the stairs themselves, on a marble pedestal that supports a small lamppost, two small round ceramic tiles, also from the Chini manufacture, have been applied on opposite sides.