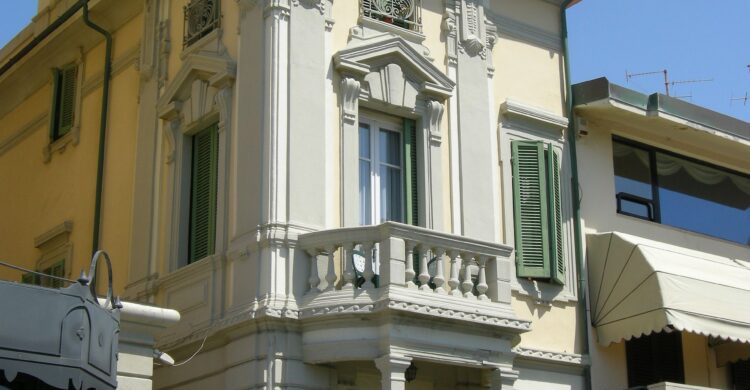 Il Villino Il Guscio is a stately home located in Via D’Annunzio in Viareggio.

History
The villa, built in 1914, is located in Via Gabriele D’Annunzio, in the residential area near Viale Carducci. For some years now it has been subject to the protection constraint based on law 1089/39.

A conservative restoration and restructuring project dates back to 1991 which provides for the release of the villa from the service access of the Belmare hotel, now also occupied by the emergency staircase, and the creation of a new entrance on via D’Annunzio, on the basement.

The restructuring instead involves an internal subdivision into three small real estate units arranged one on each floor and connected by the staircase, kept in the original position, thus becoming a condominium.

Following the recent renovation of the nearby Hotel President, an iron emergency staircase was placed on the east side which greatly modifies its valuable original configuration, in particular making the west elevation unreadable. The corner body, with the pediments and the terrace above, which certainly represents the most interesting part of the villa, thus loses its function.

In the roof terraces the view towards the sea is missing, due to the excessive volume of the hotel and the villa is crushed and undervalued in its environmental surroundings. The recent restoration of the roofs and facades, completed in 1990, have been useful and fundamental for the maintenance of the property, even if to date there is the incompleteness of the renovation works aimed at the entire recovery of the building.

Description
The villa rises on four floors above ground, in addition to the basement and is located within a small lot near the Hotel President, in via D’Annunzio, a stone’s throw from the sea. Built in traditional masonry, with light colored smooth plaster surfaces, the villa was recently renovated and divided into three small apartments for tourist use.

The most interesting architectural aspect of the villa is not so much the planimetric configuration, with a rather simple layout, but rather the appearance of the two facades.

The building is characterized on one side by an original double vertical motif consisting of a body in the foreground, which marks the corner of the building, and by a higher and further back side, typologically referable to the tower, which joins close to the first and ends on a terrace.

Of elegant workmanship is the small terrace on the first floor located on the main facade supported by two pillars, which rest directly on the balustrade of the floor below.