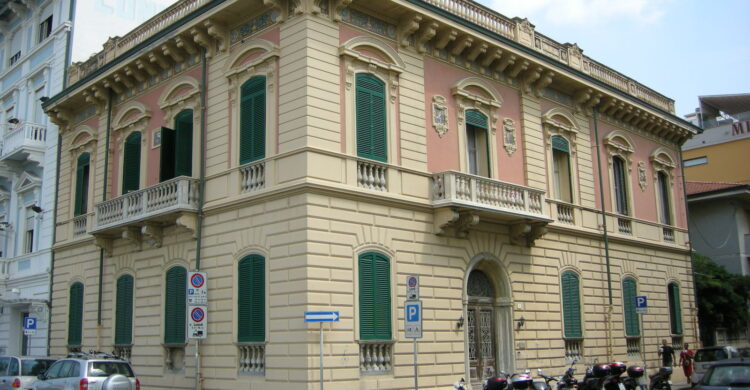 The Villino Brunetti is an elegant residence located in viale Manin at the corner of via Zanardelli, 2 in Viareggio.

History
From what appears on the basis of the maps of the Old Cadastre, the building was built in the years between 1873 and 1879, within a subdivision that extends existing roads towards the sea up to the construction of the avenue to the sea, the current avenue Manin. In particular, the lot has the shape of an elongated rectangle with the long side perpendicular to the sea.

In the Viareggio plan of 1879, the lot is instead built with an almost square-shaped building, inserted in the corner between the streets and adjacent to the building bordering on Viale Manin, equipped with a courtyard approximately double the size of the building itself. The extension of the building on via Zanardelli can be traced back to a period between 1879 and 1908. As can be seen from the cadastral plan of 1908, which corresponds perfectly to the current one, the building has not undergone planivolumetric changes since then.

Subsequently the building became the property of Crastan and in 1925 it was renovated by the architect Alfredo Belluomini to use it as a boarding house (Pensione Majorca).

It later became the property of Tonioli, industrialists of marble, it is the subject of the renovation of some internal parts such as the jambs in marble blocks of the doors on the ground floor and, probably, the floors in grit of square size cm. 20×20 in several rooms.

In 1969 the villa was taken over by Carlo Arrighi, the current owner, who used the part facing via Zanardelli as a dental practice and the original square layout as his own home. The granite flooring in the main entrance and that of the dental office is from this period. The roof balustrade was recently restored

Description
The building is characterized by a balustrade above the eaves which simulates a terraced roof, instead hiding the slope of the roof pitches.

The under eaves, characterized by rather evident triglyphs compared to the grandeur of the building (it also has double corner triglyphs), has ceramic friezes by Tito Chini.

Some tiles by Tito Chiniche are found on the first floor, on the two facades near the French windows of the balconies within vast fields of pink plaster, within a square frame enriched by volutes, there are also the preparatory drawings. Interesting is the drawing with the turtle with a sail that recalls the motto “Festina Lente”, i.e. hurry up slowly. The two panels with cupids both have significant writing: the blindfolded cupid the phrase “Game of love and chance”, while the cupid shooting the arrow the inscription “Vince chi fugge”.

The windows on the first floor are enriched by rather elaborate frames and by Renaissance tympanums supported by false corbels. The ground floor windows are surrounded by fake ashlars arranged in a radial pattern and have no similarities with the others except for the parapet in marble columns which is completely similar to the parapet of the balconies and that of the balustrades of the roof.

All the fronts are decorated with double string course bands and faux ashlar – of reduced thickness – on the ground floor and partly on the first floor. The only entrance on the ground floor, on via Zanardelli, is made of afromosia wood and is embellished with a white marble frame, two wrought iron lamps and a wrought iron rostrum with a highly worked and refined design.

Inside the house, the staircase, illuminated by a large skylight, is made of marble and is enriched by an elaborate wrought iron railing with a ribbed brass handrail, based on the original design by Alfredo Belluomini, which highlights here his own artistic talents and the great ability of his collaborators. Also noteworthy are the two large vases in white marble placed inside the entrance hall.

Due to changes in ownership and use of the villa, the internal staircase also remains the only remarkable element of Belluomini’s project, while the other rooms have lost the peculiar characteristics of the period.

Critical Luck
As regards the critical success of the Brunetti villa, reference should be made to the work of the architect Alfredo Belluomini and the painter Tito Chini, whose work has been duly re-evaluated in recent decades. The villa is one of the buildings that have been the object of Alfredo Belluomini’s intervention “over the period of time that goes from 1918 – the year in which the first signed project can be documented – to 1930”. Also for this villa, “Belluomini restores the image of an eclectically fifteenth-century and bizarre taste, sometimes humble, but almost always exuberant with minute and detailed decorations”. The elevations of the building present a global composition made up of typical Renaissance elements and decorations by Chini which underline, here as in other buildings, the collaboration existing between the latter and Belluomini.