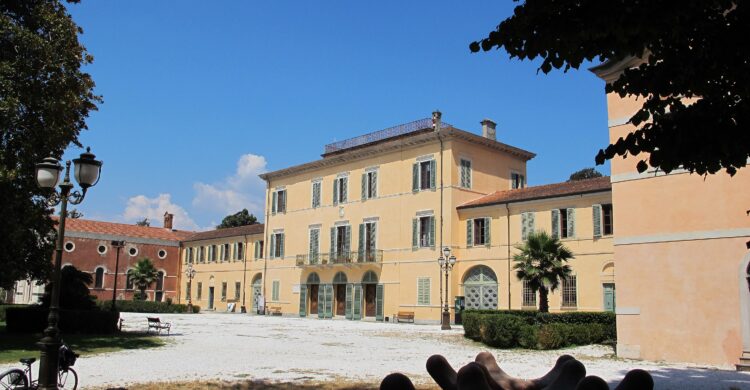 The Bourbon villa in the Viareggio estate was built on Viale dei Tigli which connects the seaside town with the hamlet of Torre del Lago.

The villa, designed as a hunting lodge, was built starting in 1821 by the court architect Lorenzo Nottolini for the Duchess of Lucca Maria Luisa of Bourbon-Spain. Thus three separate buildings were created, each with three floors, with the central body intended as a noble residence and the lateral ones as stables, warehouses and service homes. The large park, which today is part of the reserve of the natural park called Migliarino-San Rossore-Massaciuccoli at the height of the locality now called Lecciona, was cut by the large Viale dei Tigli.

The construction, which had been built to a much reduced extent compared to the initial projects after the death of Maria Luisa, was enlarged in 1834, with the enlargement of the lateral bodies and the construction, gradually over the years, of other satellite buildings, such as stables, settler houses and greenhouses. Around 1850, with the construction of other bodies of buildings, the central villa was connected to the side wings and the garden was restructured, for a total extension of 36,000 m².

The Sepolcreto chapel was built in 1849 on behalf of Charles III of Bourbon, Duke of Piacenza and Parma, and was dedicated to Saint Charles Borromeo. From a reserved passage, the ducal family attended the mass officiated by the Franciscan friars. However, today’s appearance derives from the renovation of 1885 by the architect Giuseppe Pardini, who used precious marbles inside and out. Most of the dukes of Bourbon-Parma are buried there: of particular importance are the monumental tombs of Charles III of Parma (whose body was exhumed and studied by the Paleopathology Division of the University of Pisa under the direction of Gino Fornaciari), and of Charles II of Parma.

From 1871 Margherita, wife of Charles Mary of Bourbon-Spain, Carlist pretender to the throne of Spain, resided there permanently: it was the period of greatest splendor of the villa, during which it came to host a court of 36 people. Inside remain the main staircase and some rooms with sober fresco decorations or rich inlaid floors. After Margherita’s death (1893) the villa passed to her daughter Bianca, changing the name to Villa Arciducale, after Bianca’s husband, Archduke Leopoldo Salvatore of Habsburg-Lorraine. In 1906 the Navy confiscated the villa for the needs of the Balipedio, and it was used by the military during both the first and second world wars, hosting both a German and an American headquarters and suffering numerous plunders and damages. At the end of the conflict it returned to the legitimate heirs of the Bourbons, in particular to the Archduchess Margherita of Habsburg-Lorraine, Bianca’s daughter, who continued to live there for a long time until she, in turn, shortly before dying, gave it up in 1985 to Benvenuto Barsanti, who then donated it to the Municipality of Viareggio. Since 1999, a project to restore and reuse the park has been started.

Currently the villa is also the headquarters of the Migliarino-San Rossore-Massaciuccoli park authority.