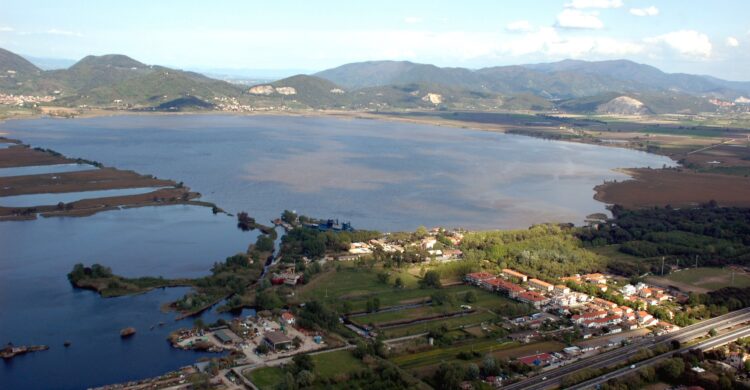 The reclaimed plain surrounding Lake Massaciuccoli was originally entirely covered by marshy areas, formed by the ancient mouths of the Serchio. The residual marshlands, located north of the lake, are still of significant size (almost double the surface of the main body of water). The entire lake and part of the marshy area are included in the Migliarino – San Rossore Natural Park, which has not been able to stop some forms of heavy environmental degradation.

The lake has a functional emissary, the Burlamacca Canal which flows into the port of Viareggio, and another, the Bufalina ditch, from which the waters are pushed to the sea via a drainage system; the tributaries consist of the modest Rio di Quiesa, the Barra canal and above all the drainage canals of the reclamations behind the Pisan bank, which bring in poor quality water.

Physical characteristics
The lake and the district of ditches and canals were an important stopover for all migratory birds en route to warm countries. Most of the canals were artificially created in various periods, even during the twenty years of Fascism, to clear the nearby countryside of malaria and also for the extraction of peat. Furthermore, until recent years, the extraction of silica sand has subtracted hundreds of hectares from the natural environment.

Some vast secondary basins, of great depth, are in fact derived from the quarrying of silica sand for the manufacture of glass quite present in the area, an activity now prohibited for several decades. The peat extracted from the lake was instead used as fuel for the furnaces.

Flora
There are typical marsh plants in the area such as the marsh reed, the water lily, the fishbone, the Lemna minor, the Ceratophyllum demersum, the Lemna gibba, the Osmunda regalis, the Typha latifolia and the Typha angustifolia. The area still hosts the largest extensions of sedge (Cladium mariscus) existing in Italy, and very large extensions of sphagnum moss which have enormous environmental value. The sedge was locally collected in the past and used above all as manure in the stables. The naturalistic value of Lake Massaciuccoli has considerably decreased in recent years due to the eutrophication of the waters, an unsolved problem which has caused the disappearance of many species of aquatic birds for which the area was famous and the alteration of the natural vegetation.

Fauna
Birdlife
The marsh harrier, the gray heron, the great white heron and the cattle egret are present in the area (especially in the fields around Migliarino Pisano), the little egret, the snipe, the coot, the mallard and the river nightingale, the reed warbler and the reed warbler in the reeds. In winter, the cormorant, the great crested grebe and the little grebe are present as winter visitors. In spring and summer the lake is populated by swallows and house martins, as well as the black-winged stilts, some waders, the rare bittern, the squacco heron, the garganey, the white-winged tern and white-winged tern (symbol of the oasis). In the area of Villa Ginori there is a large heronry of purple herons (at least 80 pairs).

Ichthyofauna
There are tench, mullet, gambusia, carp, crucian carp, largemouth bass and bluegill, rudd, eel. The most common species in the lake is the catfish. In the 1990s, the appearance in the area of the voracious Louisiana red shrimp led to alterations in the ecological balance of the lake, well documented by the Florentine zoologist Francesca Gherardi.

Sports and recreational activities
Throughout the year, various sports activities take place on the lake, in particular rowing, canoeing and sailing.
Another important aspect of attraction consists of the guided tours organized by LIPU, since the lake is part of a protected area.