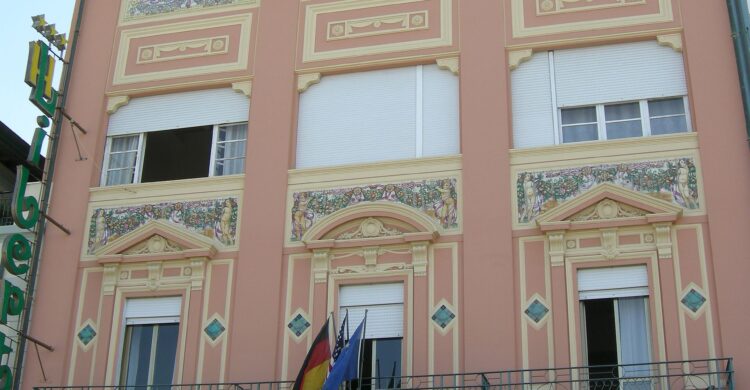 The Liberty hotel is a building for hotel use located in via Manin 18 in Viareggio.

History
The primitive layout of the building dates back to the years between 1862 and 1873, the year in which a map was drawn up in which it appears to have an almost square layout, with the main front aligned with the other buildings facing Viale Manin and two narrow bodies, elongated in the back garden, aligned along the boundaries of the lot.

A confirmation of this plan comes from the “current state” of the ground floor presented to the municipality in 1925 by Amedeo Cataldi who, in September 1924, the first known owner, asked, based on a project by the architect Alfredo Belluomini, to be able to replace the deteriorated roof, facing the street itself (viale Manin) with a terrace, and at the same time redoing the whole facade of the house itself. From the drawings attached to the application, a prospectus and a section on a 1:50 scale, the house appears to have two floors in the area facing Viale Manin and three floors in the back. The project, which was actually completed, involves the demolition of the pitch of the roof above the two-story part to create a terrace.

As regards the design of the main façade, it should be noted that its construction has remained almost completely unchanged to this day. On 25 April 1925, Cataldi presented an application to the Municipality to obtain permission to “transform the ground floor of the house itself, by moving the walls, openings and stairs” and produced the “current state” and the “transformation” of the ground floor as documents , again signed by the architect Alfredo Belluomini.

The ground floor plan of the current state, i.e. the plan of the building before the interventions of 1925, presents a schematic subdivision of the main part with a stairwell positioned to the right of the entrance and two elongated bodies in the rear garden. The “transformation”, then completed, involves the demolition of some walls in the main body to create reception rooms and a garage and the movement of the stairwell to the left of the entrance, the demolition of one of the two elongated bodies at the rear and the restructuring the other in service areas (washroom, kitchen, cloakroom, cellar, pantry). The building probably did not undergo further changes until it was sold by Cataldi in 1959.

In November 1960 and January 1961, the new owner presented the request for two building permits to the municipality of Viareggio to raise the building up to the current five floors. In the documents presented to the municipality, the elevations are figuratively totally different from the following construction, which is the one visible today. The renovation keeps the elevations of the ground and first floors almost unchanged and re-proposes for the upper floors a configuration similar to that of the lower floors.

As regards the internal subdivision of the rooms, this is considerably modified so much that the only original element left is the white marble staircase with wooden parapet. It should be noted that the 1961 elevation was possible by creating, starting from the ground floor, a structure of reinforced concrete pillars connected to the new floors from the third floor onwards, so as to structurally result in a new building “stuck” on the pre-existing building.

Architecture
In formally describing the Liberty hotel, it is necessary to divide the object into two parts: the one created in 1924-25 thanks to the interventions of Alfredo Belluomini and Galileo Chini for the ground floor and the first floor, and the one born from the subsequent elevation of the sixties, for the other three floors.

The intervention of the 1920s
The elevation of the part built in 1924-25 is presented on two distinct floors: the first, on the ground floor, characterized by a false ashlar interrupted at the level of the entrance door and the two side French windows; the second, on the first floor, punctuated by three large French windows, which overlook the balcony that marks the level between the two floors.

The French windows on the first floor end with Renaissance tympanums and cornices decorated with ceramic panels made by Galileo Chini on which decorations of garlands with stylized floral motifs and cherubs stand out; and between the windows, rhomboidal panels with geometric designs, also by Chini. The balcony between the ground floor and the first floor is characterized by decorated masonry shelves and a wrought iron balustrade worked with geometric motifs, both corresponding exactly to the drawings presented to the Municipality to obtain permission. The building ends with a “finely decorated balustraded parapet”.

The intervention of the 60s
Following the raising works carried out in the 1960s, the terminal balustrade was dismantled and the building was raised up to its current five-story configuration. Although the first two floors have remained unchanged, the elevation marks an evident rift between the old and the new composition of the facade. In fact, even if new decorations made with ceramic tiles appear, even if a balcony of the same size and with a railing with motifs similar to the original one has been created on the top floor and special shelves have been created under the eaves similar to those that support the terrace on the first floor, “however, the new vertical wall compartments are too accentuated, almost intended as immense pilasters”.

Critical Fortune
As regards the attention from the critics, the Villa Cataldi (later Hotel Liberty) is included within that production of Viareggio architecture of the 1920s which mixes “eclectic-fifteenth-century tones with elements of oriental derivation. It reappears the architectural order, ungrammatical and fantastic in the exuberance of frames and corbels, sometimes interpreted in a grotesque way and combined with various other decorative subjects.In fact, the presence of vast ceramic decorations is the novelty that characterizes and qualifies the radical change in architecture Viareggio in the 1920s. Very often, indeed, it is precisely the ceramic decoration that takes on the key value for reading the architectural fabric, becoming the main stylistic feature of this bizarre style”. “The San Lorenzo Furnaces, which Galileo and Chino Chini directed in the Mugello, were able to indulge themselves in a vast production for architecture. […]. Above all the tiles are the most significant pieces, both in the form of frieze continuous […] or reduced to single panels as in the elevation of the Misericordia headquarters and the Liberty hotel […] Each of these decorations was conceived as a unique, unrepeatable piece, even if a certain reiteration: cherubs with festoons, vases and meticulous floral triumphs, seascapes with sailed ships or with strange and grotesque animals”.

For the Liberty hotel, as for countless other buildings, the name of Galileo Chini, “the mastermind of this design of stylistic transformation”, is compared to that of the architect Alfredo Belluomini who allows the realization of this transformation, restoring “the image of an eclectically fifteenth-century and bizarre taste, sometimes humble, but almost always exuberant with minute and detailed decorations: think that even the railings of the terraces drawn on the building permit were those actually put in place”, just like for the Liberty hotel.