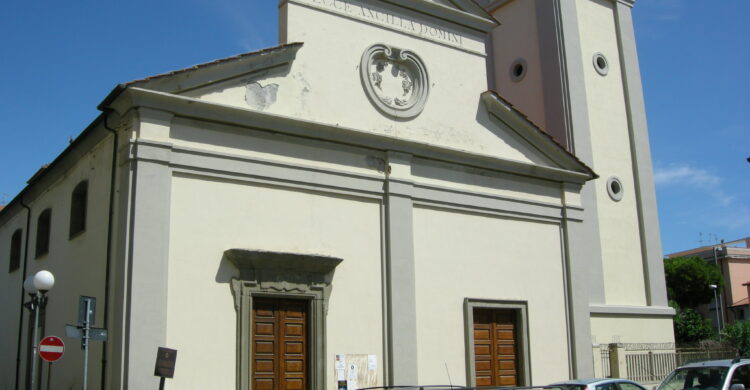 The Church of the Santissima Annunziata is a Catholic place of worship located in the homonymous square in Viareggio, in the historic core of the city (Rione Vecchia Viareggio).

In 1546 the Republic of Lucca assigned land on the beach for the construction of some buildings, now largely disappeared: the Commissioner’s house, the room for the Abundance office, the church and a square.

The church was built from 1559 to 1560, under the commissioner Girolamo Busdraghi and was dedicated to St. Peter.

On 23 December 1619 it was elevated to a parish and entrusted to the Reformed Friars Minor of St. Francis. On March 24, 1621, the Confraternity or Company of the Santissima Annunziata was established, which was very active in Viareggio on the social front, especially in the plague of 1630.

On 26 December 1638, the newly inaugurated Church of Sant’Antonio was elevated to a parish in place of the Santissima Annunziata (at the time still San Pietro).

On 5 October 1667, the church was granted by the Lucca government to the Compagnia dell’Annunziata, and also assumed its name. The church was enlarged in 1740 and in 1749, the year in which the Company asked the Municipality of Viareggio for a contribution for the construction of the bell tower. On 25 March 1755, on the occasion of the anniversary of the Santissima Annunziata, the Fair of pebbles (small terracotta objects that were traditionally sold) was established and is still held today.

On 15 April 1780, a terrible storm hit Viareggio, but significant damage to people and things was avoided. The population, who had gathered in prayer to the Virgin, considered this a miracle.

Since 15 August 1943, the Santissima Annunziata has been the patron saint of the city.

The bell tower, undermined during the Second World War, was later rebuilt. The current bells were cast by the Ottolina foundry in Bergamo after the war.

In 2020, the church was declared a sanctuary.

Description
The church is divided into two naves, built in different periods. In one there is the main altar, while in the other a secondary one, dedicated to the Dead Jesus. On the main altar is a painting of the Santissima Annunziata, in a marble frame from 1818. The work, which was destroyed during the bombings of May 12, 1944, was from the 17th century Bolognese school, and by some attributed to Sister Eufrosina Burlamacchi . It was replaced with a faithful reproduction, made by the local painter Alfredo Catarsini.

On the secondary altar there is instead the statue which is carried in procession every three years on Good Friday.