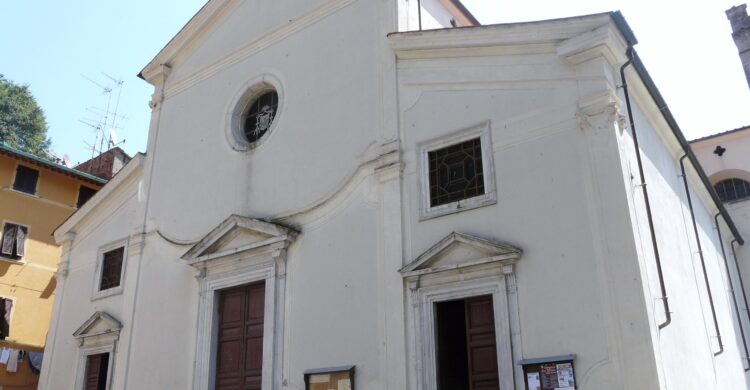 History
The works for the construction of the current church began in 1422 near the pre-existing one, which was dedicated to Saints Simon, Giuda and Agata; already in 1430 they stopped due to the looting of Seravezza by the Florentine troops, to start again in 1506 and end in 1522.

Already dependent on the parish of Vallecchia, it only separated from it in 1531; it was consecrated in 1569. Subsequently, throughout the 16th century and in the following one, until 1670, the building underwent various restoration and expansion interventions, including the one for the construction of the two lateral naves; in the same years the polychrome marble furnishings were made, including the high altar and the pulpit, attributable to Jacopo Benti.

The church, damaged by bombing during the Second World War, was subsequently restored and reopened for worship.

Exterior
The exterior of the church of Santi Lorenzo e Barbara is characterized by the Baroque facade, dating back to the end of the 16th century; it is salient, crowned in the upper part by a cornice ideally supported by composite and Tuscan pilasters. On the frontispiece there are three marble portals with a triangular tympanum, each of which is surmounted by a window, square above the side portals and circular above the central one.

The Bell Tower
On the right side of the church, between the transept and the apse, stands the bell tower of the church, completed in 1522; with a quadrangular plan, it has a particular crenellated crown and two mullioned windows with a small column on each of the four sides. Five bells are kept inside the top floor, one of which is located in the mullioned window north of the cathedral from the church of Gallena; while the other four are in Eb3 major chord, i.e. A3, G3, F3, Eb3 one of which was cast at the end of the 16th century by the progenitor of the Campana family, who cast the major bell of the Pieve della Cappella the year before. By now the characteristic Lucchese sound with the standing bells has been lost, this also for reasons of static nature of the tower which is starting to feel its almost 500 years.

Interior
The church of Santi Lorenzo e Barbara has a Latin cross plan, with a nave divided into three naves by round arches resting on Tuscan columns, with a barrel vault with lunettes 15 meters high in the central nave; on the cross rises the circular dome, externally octagonal, with a low drum and frescoed coffered cap, which has a diameter of 10 meters and which at its top reaches 23 meters in height.

The central nave, beyond the cross vault, ends with the deep semicircular apse, hosting the presbytery, inside which, in a central position, there is the high altar in polychrome marble; the latter, the work of Jacopo Benti who created it in 1683, has a richly inlaid frontal with the Martyrdom of San Lorenzo in the center and the tower of Santa Barbara and on the sides Crowns and palms of martyrdom.

Along the aisles there are various Baroque altars, four on each side, and others are in the chapels that open onto the transept. In the chapel dedicated to the souls in Purgatory, which overlooks the right arm of the transept, there is an octagonal marble temple surmounted by the statue of Jesus the Redeemer, inside which various relics are kept, including those of the titular saints of the church; on the back wall of the left transept, on the other hand, there is the chapel formerly of the Blessed Sacrament, now dedicated to the Madonna del Soccorso, whose effigy painted on a slate is inserted inside the baroque altarpiece; the chapel itself is decorated with the statues of Saints Joachim and Anna and a marble altarpiece (1727) with the Glory of Angels.

A large part of the pictorial furnishings of the church also dates back to the 17th century, among which the Pentecost of Passignano stands out.

The pipe organ
In the apse, behind the high altar, on the floor, is the pipe organ of the church, built by the Fratelli Ruffatti company in the second half of the 20th century.

The instrument is enclosed within the case of the previous instrument, originally in the choir loft, with an exhibition formed by five main pipe cusps, three on the front and two on the sides. The transmission is electric and the console, also located in the apse, has two keyboards of 61 notes each and a concave-radial pedal of 32 notes.